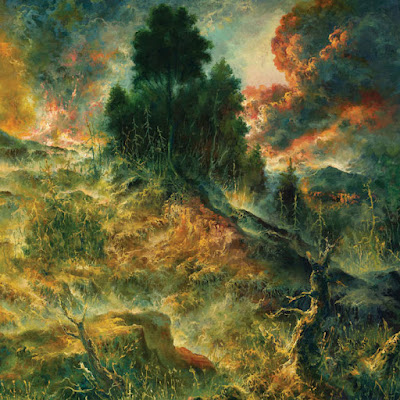 This album came out in April, and I am just now getting around to it. The French band takes a more progressive direction here.  Things get more metallic for the second song; it takes on a black metal snarl and a storm of blast beats emerges. I am not a fan of 19-minute songs. Five minutes into "Celestial" the idea to extend it another 14 minutes seems like they would be hard pressed to do so. A minute later everything drops out and that is when the second half of this song which should by rights be the third track kicks in. It is not like a theme is really continued from that point, as they music is darker and more progressive when it comes back in. I have heard doom and death metal both reference in regard to this album and while as the second songs progresses there are some doom influenced moments, the music itself is black metal. It should also be said there is no reason for this song to be 19 minutes a great deal of fat perhaps two minutes of it could have been trimmed from the end.

The third song is sadly also 19 minutes long. It does lean in a more death metal direction. With the vocals taking the growl in that direction and, the first few minutes really focusing more on hyper aggression. The riffs do groove more than they did on the second song. They wander off into a jammy part which is another section where this could have made this into two songs. They are capable musicians and come up with some cool jams, but they need more restraint when it comes to song writing. The sung vocals on this song work really well giving it a more Pink Floyd feeling. The sax hammers this point home. Almost twelve minutes into the song it does build into something that is more black metal in the mood. In the lst three minutes things fall apart into atmospheric chaos, once again proving this song does not need to be asl long as it is.

"Insignificant" is thirty seconds from hitting the 19-minute mark that curses these songs. Clean guitars wander around like a spring day. Like the other songs, this one seems like it has run its course as the song loses its gas, but when things go in a more black metal direction with the sonic buzzing of the riffs then it becomes more interesting. Like the others there is at least three minutes that could have been edited out. The last track is just an ambient outro and not a song. I will give this album an 8, if they cut things back and focused on the songs it could have been better, but as it is they do have some great moments and are great at doing what they do even if what they do is not what you expect from them to do.