Panzerfaust :" The Suns of Perdition, Chapter III: The Astral Drain" 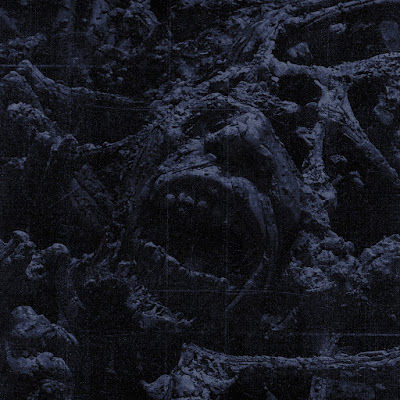 If these guys are always as dark and sonically sinister as they are on the opening track of their 6th album, then I have been missing out.  The lack of blast beats is inspiring and while the dense sound has a great deal in common with sludge, this still feels very much like black metal. While I like all the creepy elements of their sound that they have in play, the question becomes, but can you write a song. I always talk about this when it comes to extreme metal genres how they first song grabs you with the sheer heaviness then the sound vs song kicks in. The throaty roar of the vocals could also be applied to so sludge or death metal band as there is less of a scream to them than what you expect from death metal. The second song does work off a very similar throb though the arrangement of the song offers enough dynamic shifts to it once we get mid-way into it.

Another secret to this band's success here seems to be the production. This album sounds really good, they are not just going for a cavernous cvlt sound but allow nuance to bring out things such as the intricate drumming. "Bonfire of Insanities" is more melodic than the first two songs. The guitar is picked out, and spacious. There is more of a harrowing and hypnotic atmosphere pervading, with sung vocals layered in the background. the vocals are more purposeful in their call and response than most black metal bands where they are just an obligatory human layer of static sound. Though this sounds more like blackened sludge than black metal, until things gain momentum at the end. One point of interest regarding this album is each song is bookended with interludes, though when you let the song play, they just see like they are part of the main song. The exception here being the almost six minutes and driven by percussion and droning guitars, it would almost be a song if it did not just work off the one idea.

Things have a stormy build temp wise going into " the Far Bank of the River Styx". This is driven more by a thundering under current of brisk double bass. It feels like the blackest of their black metal side so far. The album closes with " Tabula Rasa" . The growls trading off with the more roared vocals give a more Neurosis feel than invoking anything close to Darkthrone. The double bass picks up the pace to keep things from feeling too sludge oriented and putting them in a sonic zip code closer to Tombs. Overall an album that places the mood on equal footing as the heaviness which is an exception to the genre these days . I will give this album a 9.5, as this is one of the best albums that creates a aura of blackness this year.  This album comes out July 22nd on Eisenwald.