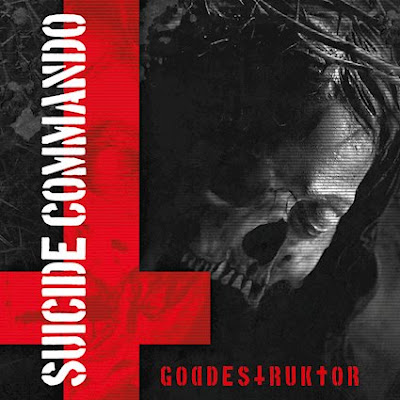 The 10th album from Belgium's dark industrial aggrotech. With lyrics like " kill all humanity" opening the album I am onboard for the message they are spreading this time around. The second volume of the song "I'd Die For You" perhaps this is a more typical sound you would expect from any goth night in any city. It does still work for the purposes of this album, unless they default to just doing that. I appreciate the use of samples on this album, it reminds me of Electric Hellfire Club. "God of Destruction" which features the chant "god is a lie", is darker and works of a more subtle groove.

"Jesus Freak" keeps things dark. The vocals keep at a creepy snarl.  As long as the high energy beats are flowing most fans are going to be pretty easy to please. It falls in an acceptable middle ground between trying to achieve a sound while serving the song. It still works on "Destroyer of Worlds" which is propelled by the frantic synth lines and narration of the samples. I can see where I might get bored with this unless the second half of this album gets a little more dynamic. As it stands this arrangement drones on a theme rather than progresses as a song. Dark and angry is a fine mood to have established for an album, the key is how you show me those feelings in different ways.

The female vocals on "Land of Roses" help them to achieve this.  There is a more Switchblade Symphony like mood to the creepiness of the song. "Bang Bang Bang' finds them back into the familiar sounds that have dominated this album so far. The vocals are even more raspy on this one, croaking out the chorus. "Sin" is an instrumental, which sounds like a great idea that never got turned into a song.  "Trick or Treat" is dark as a song about Halloween should be. the vocals bringing form and function to it. Lyrically a little more aggressive than most trick or treating, but it works. It might be higher energy, but I think "Bunkerbitch" does not work as well as "Trick Or Treat"  . I will give this one a 9, I think the marginally less inspired moments are balanced out by the strong ones.