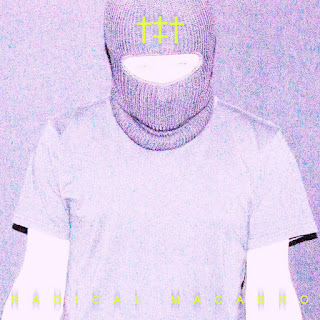 After Salem I would say this project is one of the most important names in Witch House.  Though this album finds them going in a more industrial direction, with a black metal vocal commanding the darkness they sonically summon here. Things are given a heavier pulse on the second song though the throb of the atmosphere. I like how the synth lines give the songs a writhing feeing. The is counter balanced by the industrial punches. There is more of a conventional song structure for "Nadir". The song after it follows a similar smoothed out groove that is more high energy.

There is a denser and more opaque haze of sonic atmosphere that shrouds "Dose". Perhaps this is on purpose since the theme of the album is mental health struggles and his experience going on meds which can cause a hazy disconnected dissonance.  It is pretty dark and is the track that comes closest to being witch house thus far. The vocals cut through more on " Static Noise" which is more song oriented, working off the groove of the beats. The vocals are sung in a urgent whisper which is not uncommon in the dark wave flavored industrial. It is more introspective than aggressive. The arrangement offers some dynamic sense to the song.  It flows really well.

There is a more subdued tension lurking in the shadows of "DIE HERE Now" . He is not a great singer, but Ilike how the vocals are produced as it works well with the context of the song.  The last track is just an ambient outro. I will round this one up to a 10, the sounds are there but so is the framework of the song they create which are dark and full of feeling, industrial fans and those who remember witch house will both enjoy this one.