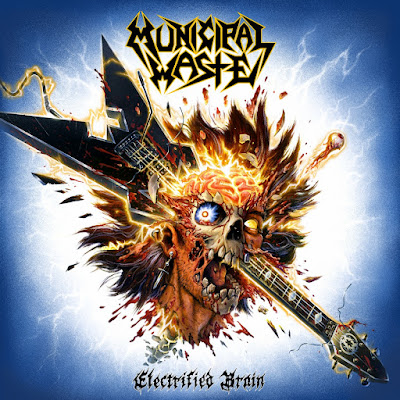 If you are a punk who likes hard core but feels the metal aesthetic is cooler then here is a band for you. This should not be news to you as these guys have been around for some time. They have taken over DRI's space in the universe.  Sure, the guitar solos are metal, but aren't most. The same can be said of the riffing at at times, though it should be judged more by its intention. When it comes to thrash bands that influenced these guys Nuclear Assault would have to be at the top of the list. Things start off airtight, with the rushed speed of "Last Crawl" the first that might not be as fresh, though it is still effective for what they are going for here. Perhaps since I was a kid and grew up listening to this when it came out the first time in the 80s I can be jaded when it comes to thrash and hoard core.

"Grave Dive" works off the call and response of gang vocals, which works for this song but going forward I hope it is not a well they go to more than once. The groove of the riff is what really keeps the song in motion. "High Speed Steel" plays on the tropes of the era. The lyrics are not this album's strength, but these are particularly silly. The punk thrash hybrid "Thermonuclear Protection" feels like Exodus to me, with the mosh part included. Some of these riffs are impossible not to head band to like the one that opens "Blood Vessel / Boat Jail". There is a more Anthrax feel to the manic thrash of "Crank the Heat" . It is a little rushed, feeling and needs a more Joey belladonna like vocal to add the melody which is what makes Anthrax stand above their peers .

"Restless and Wicked" is a very effective song you can take seriously, then at the other end of the spectrum We have "10 Cent Beer Night". Though they take this beer more seriously than you might imagine. Things get more metal for "Barreled Rage".  "Putting On Errors" is a more rushed punk song that focuses on speed and the trade of growled call and response vocals. Along with the gang vocals I mentioned earlier that would be better if they were not part of a formula. The last song also follows a pretty similar formula as this one. Overall, this album is a great of fun and they have mastered the puppetry of this form of thrash for sure. I will give it a 9.