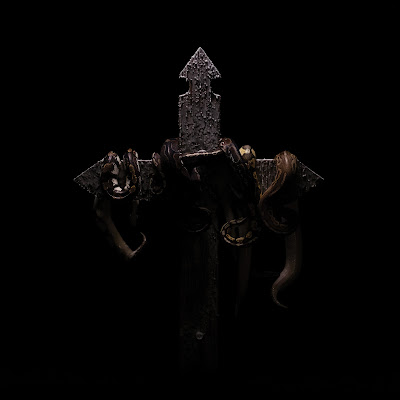 I have been looking forward to the new album from Denmark's heaviest band. To be honest they might be Northern Europe's heaviest band, though Sweden has some contenders. However, these guys are not just black metal, but also combined hard core and grind core into something dark and sonically punishing. It is not until the third song that these guys let up and allow you to breathe, hitting you with a full-frontal assault of scathing screaming and weighty blasts. Black metal is aggressive and fast, however that does not make it the heaviest genre. It is the deliberate sonic weight put behind something that makes it heavy. The difference between being hit by a small guy who is fast and big guy who has muscle to put behind his punch. They are so good at assaulting you with the catharsis of sound it often makes me to forget to listen more for the finer points of song writing. Dark and heavy is cool, but you still have to have songs. The way they use atmosphere at the end of "Exhaurire" says they do care about composition and dynamics.
With the minute and a half dedicated to "Interitus" gets the point across with a taste of thrashing grind core. There is more of a hard-core hook to "Tacet".  The bring an interesting sonic feel to the battery of your ears that is "Accipis". The vocal accents give more form and function. The vocals are more purposeful on this album. That is not to say they are going for anything in the bounds of accessible to mainstream metal crowds. There is enough abrasion to scare off the weak. I do not remember the synths standing out as much on their previous albums, so that is a fresh color. "Nunquam" is not a formula, but it does hit you with a similar styled beating. I did go back to give another listen for what I might have missed with the dense sonic blur hit me the first time around. "Vulnera" instantly resonates with me due to the pulse of dark ambiance.
There is more of a hard-core feel to the confrontational vomit of "Captivus". The jagged guitars are very violent in the lashing of their riffs. They give the same level of fucks, which is zero when they throw the equally intense "Memento" at you. It is really heavy, but I think that "Amissus" that follows it is better in terms of songwriting, as there is more feel and not just intensity. It is more deliberate and has greater evil to its throb. The title track that closes the album is a five- and half-minute atmospheric outro rather than an actual song., I would have preferred to have heard them work those songs into what they normally do, but it is what it is. I will give this album a 9.5,
10.5
Posted by Wilcifer at 5:06 PM