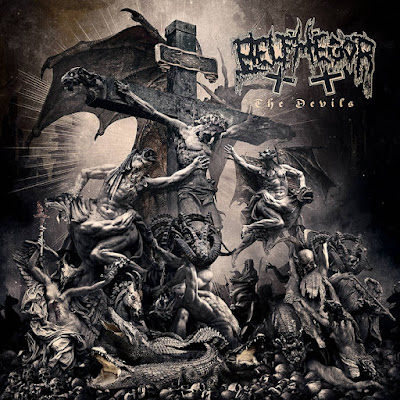 The opening track to the new album from these Austrian crushers kicks all kinds of ass. Basically, they are doing a better job of being the band Behemoth wants to be. This is their 12th album, so you would think they would be set in their wicked ways but, not things are better than ever. The second song is more aggressive than the opener, so I am not as impressed, but they get my attention with the creepy melody of the third song, which has ample Metallica influence without trying to be thrash. Granted a choir from hell chimes in and there are touches of black metal. There is incredibly tasteful guitar and a wonderful solo that adds to the mood of the song. These guys have straddled the line of black and death metal most famously, but when they accept, they are death metal things go best which is what they have done with this album. There is way more Morbid Angel flowing through their veins than Darkthrone.
"Damnation " finds them settling into more familiar territory though the "Domination" era Morbid Angel weighs heavy on the pitch bending riffs. There is a great deal of mood and power to this song. Showing that you can have all kinds of exotic melodies and still be heavy as hell. The guitar carries the bulk of the crunching weight. You have to really listen for the bass that is still more present in the mix than a Slayer album. This album has a really big sound thanks to Jens Bogren, who recorded them at Fascination Street Studios. After working with At the Gates and Rotting Christ it is clear this is the guy to go to if you want your metal sounding massive. This might be the best produced metal album I have heard in some time. There is a balance of well layered sounds and everything being huge like a frost giant trampling the ruins of a post-apocalyptic city.  I am not a dude that like over produced metal, but I want clarity and density this has both.
Songwriting is the other key place where excellence has been attainted. They dive into a commitment to black metal on the song "Kingdom of Cold Flesh". While it sounds really good, and they are more than capable of pilling it off I prefer the more death metal sounds. They do a good job of splitting the difference between the two styles on "Ritus Incendium Diabolus". They have the feral darkness of black metal teamed with the hooky riffs of death metal. The closing song "creature of Fire" might be the most dynamic and stunning with female vocals soaring over everything. The guitar shares melodic passages along with chilling dissonant distorted chords that ring out. I will give this one a 9.5 and see how it grows on me so far, I am impressed.  This comes out on Nuclear Blast.
6.7
Posted by Wilcifer at 7:04 PM