Film Review: "This is Gwar" 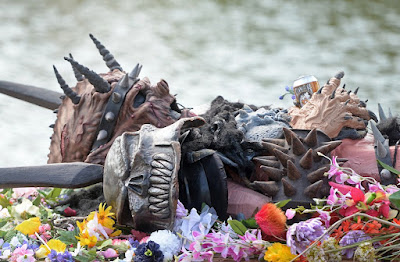 Gwar was one of my favorite bands as a teenager, it was not until I saw this documentary that the reason, we grew apart occurred. In fact, it shows how the band grew apart from who they were, and the lineup changes that brought them to where they are now., This is one of the best music documentaries I have seen in some time. It chronicles the early days in the 80s where Virginia art school kids with a passion for Kiss, comics and Dungeons & Dragons formed a community that became a band. This community which was the band's strength in the early days would also become its undoing. It is heard enough to maintain a band for decades with five people much less an entire tribe of artists who have their creative visions and egos that find themselves in battle, and not just with fake blood and cyborg arms.
The behind-the-scenes nuts and bolts that bring the blood spurting to the stage and ho that has progressed over the years, was one of the more interesting elements of the film. As someone who knew most of the band's history, provided and angle to the band I had not considered in depth. The slaves who did all the grunt work were not just roadies, but creatives that helped keep the show going, they finally not only get a voice but a spotlight. The story is told in achieved video, interviews and animated comic book strips, which given the comic book nature of the band is very fitting. The interviews are with the multitude of members that passed through as well s other musicians including members of Darkest Hour, Lamb of God and Weird Al.
I think more time should have been given to Brockies addiction, as it had a greater effect on the band than was really given a honest voice, it would have given his death more impact when they got to this point. As there was not a single person who was surprised, he died, but they were all effected. The other tragic events that took place on the long bloody road the band  This movie culminates in showing why
Beefcake was the most logical choice to replace Brockie. If you are a fan of the band this is a must see. Now playing on Shudder.
Posted by Wilcifer at 5:09 AM