November is Doom- Mother of Graves :"Where the Shadows Adorn" 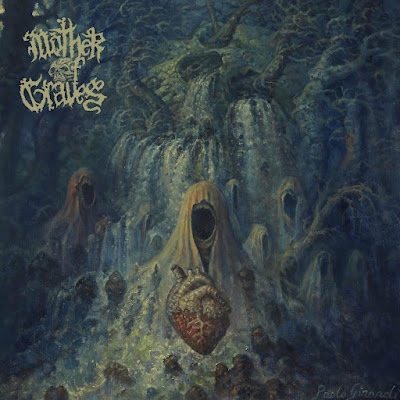 This band emerges from Indiana of all places with some killer death doom, that finds the right balance of death metal grit with the somber melodic nature of doom. The riffs are catchy and serve the songs. The second song 'Rain" is a little more straight forward in the death metal direction, trudging forward with the deep growl of the vocals continuing their narrative. There are some powerful doom-colored punches being thrown as the song progresses, but it is generally ore midtempo.  The mood is one of the most impressive things the guitars capture. They hold your own against icons of the genre like Paradise Lost in this regard, though the vocals are not as nuanced.
The guitars on "Tears Like Wine" are more sonic than being stuck in the metal riff way of thinking most bands of this sort live and die by. This willingness to explore other guitar sounds goes further for me than the piano breaks, as I have heard bands use those already to break things up.  Things take a meatier death metal turn on the more aggressive "the Emptiness of Eyes". Then to contrast this they go over into their more atmospheric and melodic side with " Of Solitude and Stone". It starts off with a calm before the storm clean guitar and builds into the kind of heavy they work with.
There is a similar feel to "the Crown". Though the tempo starts off in a more languid place before building into melodic death metal. Just keening this sound is not the be all end all as they care about writing songs. The last minute of 'the Crown 'sails off into mournful atmosphere before converging back into the roar.  "Ghost in Twilight" works really well, though treads the same dark waters they have been paddling in throughout the album, leaning more in death metal. There is more of a traditional metal feel to the last song, as the guitars harmonize. When the crunching of riffs come it is very powerful. I will give this album a 9.5, they have a formula but never dial into it, I think they mean every note here, this is perhaps the best death doom album of the year, glad that I checked it out and you should as well.
Posted by Wilcifer at 4:23 PM