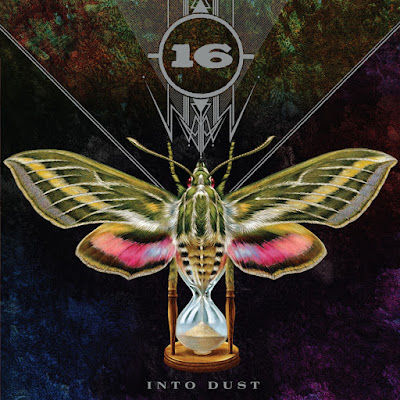 After 2020's "Dream Squasher" proved to be a slab of sonic devastation I am still listening to 2 years later, the bar could not be higher for this California band. The continued to bring it with this album firing from all cylinders with their foot to the gas of this tank.  The weighty sludge rolls over you, but with a bit of swing and hook. They are almost like a heavier version of Clutch on "Dead Eyes". There is more rock n roll flowing through their veins this time around. It is most commonly bled out on the frets of the guitars.  veins. Catchy song writing does not mean they are any less in your face or forceful in their intentions. Sometimes the vocals are layered, with singing under the more aggressive bark that is the dominate narrator.  The sung vocal sometimes reminds me of Helmet.

There is a weird interlude called "the Deep" before they dig into what is the first more doom leaning riff can be heard on "Scrape the Rocks". The more sludge ridden take on Helmet continues with the stomp of "Null and Eternal Void", that is syncopated in an almost nu-metal grooving bounce. The grind into "the Floor Wins" that is a deliberate attempt to make your head nod with the mean-spirited crunch of the riff.  They go off in a more hard-core punk direction with "Lane Splitter" which is consistent with one side of this band, though not the strongest side on the album, however They already had my expectations primed for more the metallic stomp they were dishing out. They deliver this in a big way on "Never Paid Back".  It is darker and creeps with a slithering syncopation.

"Dirt in the Mouth" continues to deliver the crunch and groove. This is a more accessible album than "Dream Squasher", but far from a sellout. There is more swagger to the riff of " Dressed Up to Get Messed Up" , the chorus is almost like White Zombie. The metal years of Corrosion of Conformity is also a fair point of reference when it comes to weighing the sonic depth of this album. The riffs themselves on this song are pretty infectious. They draw from jazz sounds going into the last song, which takes a dynamic shift back into their more hammering sound. It is different than their previous album, but matured in terms of songwriting, so I will give it a 10.

Email ThisBlogThis!Share to TwitterShare to FacebookShare to Pinterest
Labels: -(16)-, 10, November is doom, sludge