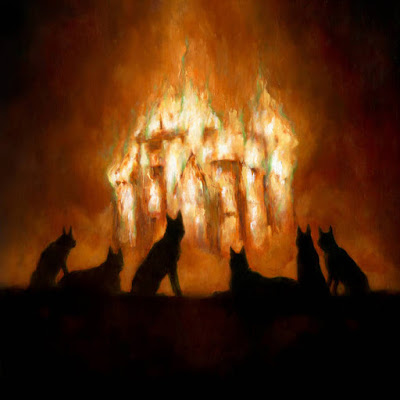 This band from Sacramento is doing something very interesting at the onset of this album. They have a slow core feel with reverbed twanging guitars playing under delicate melodies. They do wind up bringing down a doomed-out crunch to things. They have an impressive array of sounds collected for the journey they take you on, however it feels like I have already heard three songs in six minutes. There are not any repeating themes, though they are hanging on tension that they build off in a Tool like manner. Harsh vocals and more metallic trapping eventually take root. There is a more folkish yet Jeff Buckley soulfulness to "the Furnace". The undercurrent of distorted riffage works it way in again, not lingering as much as the first song. The smoothly sung vocals work really well here.

The funny thing is I first started off reviewing this album back in August. Got two songs in forgot, and now I am returning to it and find myself more receptive to the sounds gathered here. The guitar is more aggressive and attacks more like sludge than doom. the guitars on this album sound great no matter the genre being attempted here. "In the Tall Grass " is an interlude rather than a song as defined by their massive undertakings. They work off a similar dynamic as Witnesses in the sense we have heavy music with calmer clean vocals sun atop, granted this band is not afraid to bring the growls, but the contrast is often similar, despite the darker doomier sense you get from Witnesses.

The close the album with the title track venturing at times into that sonic land bordering post-rock and sludge. The harsher vocals open the songs with a more aggressive rawness, but the song progresses into the more melodic vocals taking the song away. Six minutes in and things break down into a more atmospheric passage with the drums holding it down. It bears saying the drumming on this album is fantastic. The song builds into a more metallic stomp. The vocals a coarse bark that conveys anger rather than the more introspective wrath of doom. I will give this album a 9, I appreciate how dynamic it is and how well done the clean vocals are, how much further listening this album will get is not certain, but if you are into more melodic sludge I recomend it.