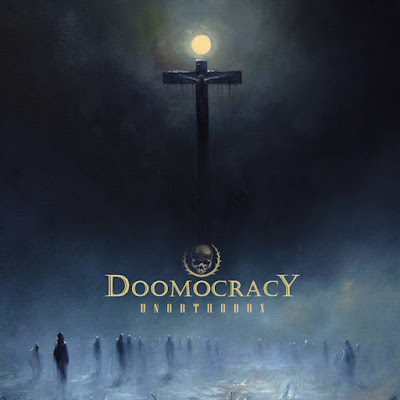 I have a weird thing about band names. In most cases i I do not like a band's name I will not listen to them. Because if that is how creative about their brand, then how creative is their music going to be.  I have seen this Greek band's name around when it comes to doom. This album is beginning to make me think those claims are founded as so far this feels more like a moderately darker power metal album. The opening song has more of a Katatonia feel, which I am willing to consider as doom. But "Prelude to the Apocalypse" is too upbeat and caught up in its self-proclaimed majestic glory and metal yodels that it never gets dark.

I guess this supports the argument that Metallica should have changed their name, when they stopped playing Metal on the Black album, there are still elements of metal, but it's just big radio hard rock. This band has a similar relationship with doom, there are elements of doom but they are really a power metal, they have more in common with Kamelot than Pallbearer. I find myself having to take doom out of the equation and say without labels how are they as a power metal band, which is they get the job, done, there are maybe 10 power metal bands I like, if we are lumping Queensryche and Iron Maiden into that, when they experiment with more exotic scales and phrasing things work the best for them. This is what makes "Death a State of Mind" one of the album's best songs. I had to back and listen to "Our Will Be Done" as it seemed like a dynamic shift in the previous song. I like the palm muted tension of the slithering riff, the chorus is not the best

Going into the title track there is a marginally more doom ridden tone though they maintain a great deal of drive in the chug .Its a good metal, song not a doom song, but it proves they are effective songwriters. The close the album out with the kind of melodramatic fervor they already displayed. It sounds good if you are into that kind of thing and is darker than most power metal. I will give this album an 8 as they are good at what they do there is just a great deal of false advertising in regards to what they do.