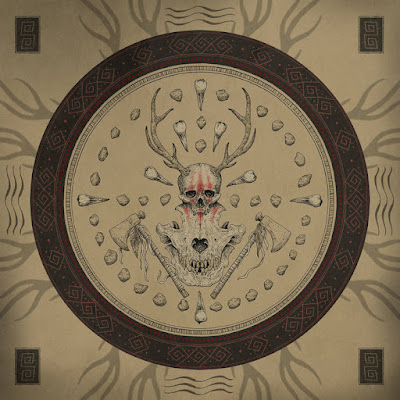 Here is an album got a great deal of hype since it's August release. A Native American black metal project. The questions today's metal should be asking is this going to be anything worthwhile once we take away the novelty of this being a Native American or am I falling for the hype machine that is capitalizing on my white guilt, so if I embrace diverse entertainment that will make me a better person. PT Barnum once said an "A sucker is born every minute" and when you take the lackluster song writing that does little to embrace its cultural influence and just sounds like any other generic black metal band that sucker is most of the mainstream metal community. The use of clean guitar might be more than many do but is not a huge leap in dynamics that makes this a groundbreaking album.
Maybe it' is black metal fans who feel ashamed for liking Burzum who are trying to accept this as their repentance. Which is the opposite of what black metal should be about. I am quickly bored by the second song. This guy is not doing anything that Agalloch has not done a million times better. "Sacandaga" starts off as blasty as any other color by number black metal band and then once we get into the verse things become more deliberate. The scowl snarl of the vocals is mid-range, not a high scream of a low death metal growl. In terms of execution this is his best attempt yet. Many times, with these projects you can tell if they are a guitarist who is playing drums or a drummer playing guitar, there is no clear-cut answer as both are workably mediocre. I begin to think drummer due to the double bass in this song. The guitars are just buzzing tremolo picked with the occasional gallop thrown in to break it up.
Title "Barefoot Ghost Dance on Bloodsoaked Soil": is the most Indian feeling thing about this album, aside from a flute blown here and there. Yes, the intensity is maintained, but it is a boring blur of guitar that feels like it is going nowhere. This could be AI generated black metal. It comes close to sounding like it, but something is off. Even feels like it sometimes, but something is off. The most generic of anything that is generic musically.  The acoustic guitar comes out again and I appreciate the darker tone to " Warm Wind Whispering Softly Through the Hemlock at Dusk". That could be another generic song title, this is however some of the album's best guitar work. Feels very Metallica influenced.  It is however not interesting enough to warrant being an instrumental. There is a lower more death metal vocal on the last song, which is more deliberate and makes me think he should have made a death metal album instead. Putting on corpse paint does not make black metal, becoming one with the darkness and conveying that with music does, you can't fake the funk or the darkness, next month will find me publishing my top 10 black metal albums of 2022 list, and those bands will explain how things went wrong here and what black metal needs to sound like, this is just cosplay I will give it a 7, not terrible, he is capable it might have been better to try this another way ,
4.9
Posted by Wilcifer at 10:16 AM