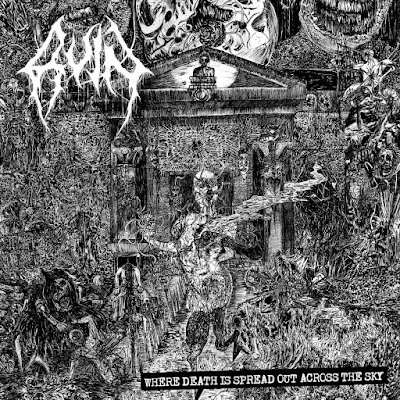 Ruin crosses many sub-genres. all of their shades of heavy are nasty. They do however still write songs, and I find their album fun to listen to. Guttural grows sometimes rise into more agonized spews. The pervading sense is dread. They do speed up into something more like death metal, but the opening track trudges a more death doom road. They indulge in forty-five seconds of ambiance going into "Dragging a Corpse Up to Hell", this crams everything into the last minute and half giving it a more grind core feel.

"Abuse of the Lord" finds them rushing more into a typical grinding death metal shuffle. Not their most thoughtful song, but it is a barrage of brutality done in a manner that is consistent with who they are, they do cushion the blow some going into "Obsessed with Sadism and Blood". It starts off with creepy sounds leading, in they still retained a dark mood to what they do even when playing is marginally safer. There is a very deliberate and ominous sound that builds into more of a straightforward death metal pace, while not overly reliant on things like double bass. The slowed grind of the guitar is more like old Morbid Angel or Incantation.

The weird ambient intros are a formula on this album, but it does break things up, so you can never say it all feels like an extension of the same song. They lurch into it very raw and heavy death doom when "Ascend into Poison" kicks in. This album is not their most inspired and plays more by conventional metal rules. They do feel a little more dangerous and eviler on the last song. Though they turn on the speed, so it falls into the more atypical death metal side. I will round this down to an 8.5 , kiind  of dialed in for what they do, but still great.