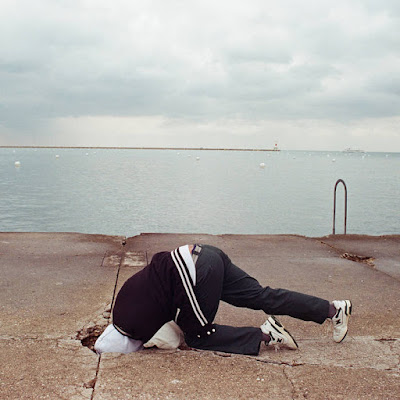 Things have changed with this project. Rather than post punk we are getting strummed indie rock, when softer nuanced vocals. Despite the stylistic shift, the music itself is pretty pleasing to my ears. It reminds me a little of the Dears. A more familiar tension possesses the woozy guitar on "Magic Garden". This has more drive than the first song, but for what this project normally does still rather upbeat. They retain the almost Cure like sense of melody on "Rocks & Blows" but it also carries a hopeful sense amid the melancholic underpinnings that remidns me more of the War on Drugs.  The vocals are hushed and urgent.  The running single note guitar lines still carry the 80s in them.

"Dibs" is more reflective and melodic, but not as compelling as the previous song though it might just need to grow on me. The vocals are pretty plaintive and the breathy quality to them encapsulates the emoting. Not a great singer but making the most of what he has to work with.  Ruth Radelet from the CHromatics joins them to lend her voice to "the Line" , which thus far is the album's best song. It ambles like a less dark version of "Lullaby" the guitar holding a similar cadence.   "Congratulations Text" offers more in the way of dynamics, not the catchiest of vocals though.

The driving strum of "Cicero"  keeps my attention. The hushed vocals stay consistent with what they have been doing for the bulk of the album. It's about where they fall rather than how they get there. Things get more hopeful when it comes to the mood of "Dominio:  The over dubbed vocal harmonies certainly imitate what Robert Smith would do but if delivered by Jacob Dylan of the Wallflowers. "Lae Shore Drive" has an almost more shoe gaze like fell to the sonic swell it embarks on. One of the albums best songs for sure. This is a change for sure, and while the vocals are not stellar, they get the job done and serve the song, the writing is great, and I enjoy the mood I will give this one a 9.5