November is Doom- Black Space Riders :" We have been here before" 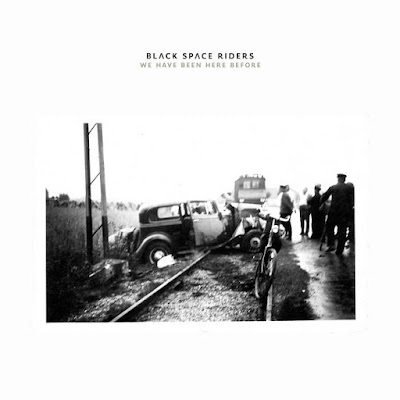 For some reason I always forget these guys are from Hermany. The album opens with a sea of retro synths before the first song "Crawling' bounces into its jerking bounce of a groove. The vocals are throaty and ride the staccato riff of the guitar. "Trapped in an Endless" has a crashing thump to it, the quirky almost post-punk vocals are given room as they sit on the bass line/. There is a darker current to this song. The vocals shift in a starker baritone to accommodate this mood. There is an oddly reserved tension to the more compressed indie rock like riff of "Almost" that spins around your ears rather than engaging hem fully like a rock song.

"This Flow" finds them to go further down the road of odd mellow grooves, much different than what I have heard from them before. It reminds me almost of Tears For Fears or Peter Gabriel. They are obviously hitting the bong pretty hard, but it is moving with a more progressive grace. What it does not have are any grandiose window dressing or pretense, things just flow naturally. "Shine" is the first song with any metallic intentions in how the aggressive riffs attack to provide a contrast to the vocals croon in the background. They continue to work off this almost new wave feel being thrown up against the more bong laden metal. The title track is possessed by an almost robotic bounce to the beat, like a cyborg Primus, though the bass is less chaotic.

The singer proves he can belt it out with power and aggression on "Beautiful" which is a generally darker song. There is also the first hint that I can hear where his German accent betrays him. This melody doe an odd dance almost like something Danny Elfman would do. "Fear No More" it not far removed from the shadow-tinged dance of the previous song. The vocals are emotive hear as well. There is a more exotic tone to "In Dust: it reminds me of when New Model Army went into a more progressive direction. There is a more metallic guitar riff that creeps in.  They continue to elegantly creep around with a darkly beautiful shimmer on "Leaving the Hill". "Whisper' almost sounds like a System of a Down ballad if run through the filter of the 80s.

They continue to take you one sonic journey that are expansive as they are quirky from new dances in dark alleys to wild wandering prog excursions colored by metal guitar slithering around it. The closing song is a ten-minute epic that might have a slight amount of fat to trim but that is largely forgivable when you consider where they go with and what they do on the way.  At five minutes in the drop an impressive metal riff that is pretty powerful. If you think Dream Theater is prog then you do not know anything about music and might not be as into this album as there are not songs to shred over but music that goes somewhere, it is a wonderful album I will give it a 10.