November is Doom- The Temple : " Of Solitude Triumphant" 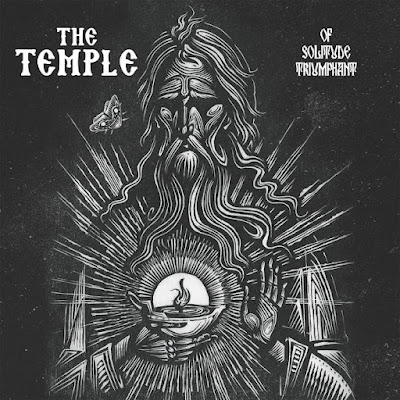 Here is a Greek band that does doom right. After reviewing Doomcracy I was beginning to wonder if they were cut out for it. While their use of dramatically crooned vocals, leans them closer to traditional doom they, are more depressive than say Trouble, and lean into the tremolo picked tension on the second song that is more common in funeral doom and often finds the genre reaching a sonic common ground with depressive black metal, The woeful baritone vocals, remind me a little of the midrange crooning thing King Diamond does. Melody wise his voice tends to ride the march into a droning chant.     I love their sound as it's dark enough for me, though three songs in there does seem to be a very uniform formula in place in terms of songwriting and the dynamics involved.

The guitar playing on this album is great, and while I understand what the mission statement of doom, is the fact these treads along the murk of the same waters so often might keep me from listening to this beyond the most recent spins I have given this album for the purpose of this review. It tends to breeze by like storm clouds on the horizon. There is a great deal of atmosphere, choral chanting, that is dark and eerie in it's majestic reverberations.  "A White Flame For the Fear of Death" captures the needed mood and finds the guitar chugging and harmonizing with equal authority. The vocals on this one are the first since the opening song to break from the chant and form a rock-oriented melody, though it retains a classical phrasing. They remind me slightly of folk metal in how the vocals are arranged, just without the upbeat frolicking.

The uniformity of sound I spoke of earlier is what makes it hard for me to tell when the song changes as if feels like a continuation of the previous song when we find ourselves on "Premonitions of the final hour". If it's not that it is the continuation of sonic themes like the tremolo guitar that returns for the last song. Though the overall result is for what you are asking these guys for they are delivering in a big enough way to make this one of the more compelling doom albums I have hear this year I will give it a 9. It drops December 9th on I Hate Records.

Email ThisBlogThis!Share to TwitterShare to FacebookShare to Pinterest
Labels: 9, doom, greece, November is doom, the Temple