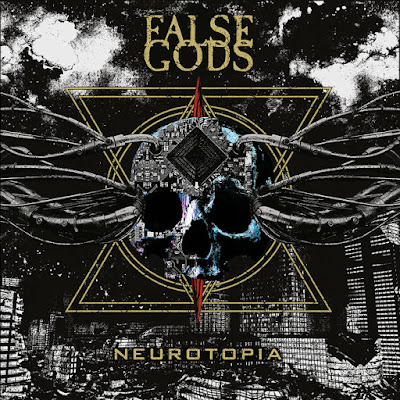 This sludge doom band from New York is an excellent example of why I so often bring up a band's influences, as they tend to form the sum of their parts, these guys have great sound it is suitable dense and dark in all the right places. There is a slight crusty edge at time. After the first song they make it apparent how large a role hard core has also played on their musical development. From the almost Fugazi like manner the vocals are sung on "Your Thoughts are Void" to the punchy crustiness coating the attitude the vocals are accent with earlier in the album which remind me of Kylesa.

Being a huge fan of their 2020 album, I knew these guys were capable and it cannot be said that they are delivering more of the same. Instead, they are attacking you from a different angle that I appreciate."Phantasmawhoria" is a great name for a song. I was not expecting it to be a fast hard-core song. It barrels at you full speed ahead, until the break down comes. "Ghost Story" is darker and more deliberate, the chord pulse more when they are not pounding at you. There is even a guitar solo to move it in a more metal direction. There is a more stomping cadence to the sludged out hardcore of " To Defy Purity". The drummer gets pretty excited and starts attacking the song more. The vocals are almost sung more in their desperate bellow. The deeper into the song the more atmosphere begins to creep out.

"Belief Crimes" carries a crusty blast beaten sound not unlike a less punk version of Motorhead in how it hits you like a train of sonic anger. There is some rock n roll guitars that smooth things out. They close the album with an Integrity cover. An odd choice, since they do share a great deal of sonic space with what Integrity did. I would have thought they might pick something less obvious. They do a good job with it, but would you expect less? I will give this album a 9, it's another solid selection of songs that does not find them standing in one place, as they straddle the lines between sludge and hard core.