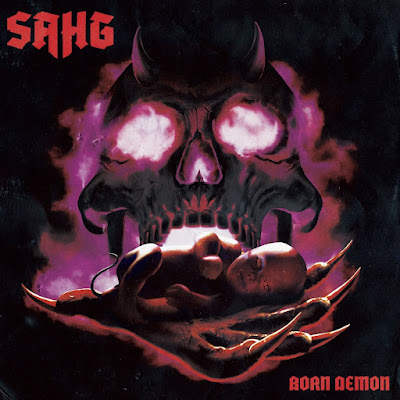 Olav Iverson marches on as one of Norway's seminal doom bands. the open up with not only more of a traditional doom, but sound heading in the direction of power metal. The vocals are powerful and poignant. They have balls to them despite being higher pitched so do not sound cheesy like most power metal yodeling. The chorus is big and anthemic. The second song is more soulful, and blues based in the melodies but does not resonate as powerfully for me as the first song. The first doom song is the title track that follows. He vocals go up higher, but not in a falsetto more in a creepy Ozzy range. It is the first really Sabbath moment, but most of the Scandinavian bands do not worship Sabbath like their western counterparts.
They kind of split the difference between the more power metal direction of the first song and traditional doom of the title on "Descendents of the Devil ". I think the key that makes this song work is how purposeful the vocals are. All too often vocals are an afterthought in metal even when they are sung, as since these guys write songs with vocals in mind it makes them shine in the darkness. The devil seems to be the subject of every song, which is fine with me. "Black Cross on the Moon" paints this theme in more of a Hammer Horror manner. They are almost thrashing  Wvil Immortal" which reminds me of "Ultimate Sin" era Ozzy. "Salvation Damnation" gallops forward with a great deal of grandiose aggression.
"Killer Spirit" has a more rock n roll feel. In fact, it's at this point where the album as a whole begins to veer off in a more rock n roll direction. This is done with a really interesting flair on "Heksedans". More carefree backing vocals forming a chorus behind crunchy guitars. The last song is darker, and more doom focused on its dread inducing mood. I will give this one a 9.5, it has everything you might want from this kind of metal., Serving as proof there is more to Norway than just black metal.
Posted by Wilcifer at 8:19 AM