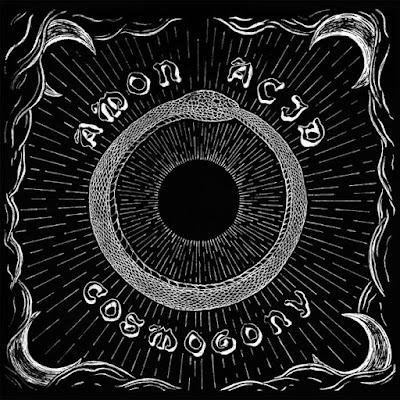 The English based band is doom of a space rock variety owing more of their existence to Hawkwind than Black Sabbath. Though they are heavier and more ominous than most of the psyche bands who cross over into doom. This can be more fully felt on the second song "Hyperion" where the come down with even greater weight. They do not sober up enough to scale back the atmosphere. They use exotic Middle eastern flavored chord progression to unwinds serpentine riffs on songs like "Death on the Altar" , where the riffs winding out with sublime grace while still maintaining tension. The vocals have the needed effects on them and not the greatest displays of vocal prowess, but get the job done as the narrative for this journey

"Demolition Wave" kind of takes you away in its throbbing drone, while enjoyable it is more of a sound than a song. The sonic depth they hit you with being so much to ingest, it is still a very fun trip for your ears to be on. There is even more of a drone on "Nag Hammandi" which is somewhat eerie in the sounds that they indulge you with. The vocals are more of a chant The hypnotic lull of the one riff they mesmerize you with has little dynamic range but is a cool sound to employ. "Mandragoras" right of the jump dances with a more intoxicating groove, that is easier to belly dance to than headbang. Then they locked into a more Electric Wizard like stoner rumble.

"Demon Rider" finds them trudges the distortion in more familiar fuzzed out valleys. The guitar riffs use wandering melodies to jam this one out. The fuzz is heavy and bulldozing with volume and power, as the keep it's groove going. They back off into more of a strum for "Ethereal Mother" . I can appreciate this for the overall dynamic shift of the album, as a song on its own accord perhaps not the most impressive. They cover more ground in terms of dynamics on the last song.  It feels like a good balance of the heavier side of what they do and the trippy vibes that give this album its own identity. I will give this album a 9.5, as it sounds great and works really well to build immersive moods. This is being released on Regain Records.