November is Doom - Black Spell: "Season of the Damned" 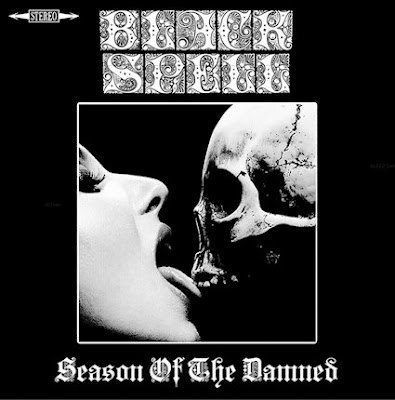 l love doom that is why I devote an entire month to it.  I go into doom albums hoping it is going to give me the fix I need. The problem being, I cannot wish a band into being themselves and, more often than not stop trying to be Black Sabbath, but in this case Electric Wizard seems to be more of an inspiration to this Italian band. The first two songs prove to still be pretty passable in this regard. The vocals which are buried behind the guitar have more in common with Mudhoney. With song titles like "We Drink Your Blood" you would think this would rule with the dark vibes it is giving off.  They are metal so this kind of imagery is pretty obligatory. You can't be a doom band singing about being happy at the beach, well you could be it would be lamer than these guys ripping off Black Sabbath. They keyboards do not make things as spooky as they hoped.

Their guitar solos are better than what most bands doing this kind of thing crank out, but not a key selling point. By "Witches Brew" they are trying to make the most of their Wah pedal and it feels a little over done. They go from boogie to a more aggressive chugged stomp. These are pretty much the basics of metal riff wise, so nothing too original going on here. Heavier than most traditional doom, but not interesting enough for them to jam this out as an instrumental. Teh solo has a sloppy Jimi Hendrix feel. It needs at least a Celtic Frost grunt. The title track is another stock doom riff that they put a little more muscle into in order to groove it out. St. Vitus is a fair point of reference for the direction they are going in here. The song does not really go anywhere as the chorus is nonexistent. They milk the guitar solo a bit. The half whined; half spoken vocals are pretty low in the mix.

The most impressive thing so far is the more laid-back mood going into "Apparitions", it's sadly just an interlude that does not develop into a song. The drummer picks up the pace for "Curse of the Undead". The vocal murmur something behind the Wah tinged guitar.  Things get heavier with the still grooving "Dead Dawn".  The song itself is just a book end for another Wah crazy solo. Neither the riff nor the guitar solo is interesting enough for this to have been a song.  The last song might be the best despite the vocals that might as well be non-existent. They get props for being darker than most and heavier than some, the guitars are well done, I will give this a 6.5.