November is Doom- At the Graves : "God is Fear" 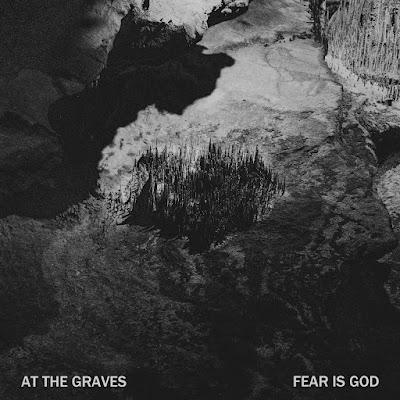 The idea of one-man black metal projects makes sense to me due to the isolated misanthropic nature of the music, doom in my mind is more organic so feels like it requires at least a duo, though the drumming is easier for someone who is more of a guitarist to pull off, so in that sense it checks out as well. Ben Price the master mind of this project, has some solid choices when iot comes to  the range of sonic colors he employs. There is a dreamy shoe gaze like quality to this. It's heavy but not overtly metal at the halfway point of the first song. He goes into a harsher vocal at times, but as far as defining this my first vote goes to sludge gaze.

The riff to the second song is equal parts angular and melodic. The vocal tradeoff between the more lethargic ghost of singing and the more agonized howl is split though leans more towards the reverb drenched sung vocal. It's as heavy as Nothing's more beefier moments with the roars the only thing anchoring it toward the side of heavy. The bass line gets beefier for the title track which cuts through the lingering indie rock gloom. The guitar creates a shimmer of taunt tension, placing this on the shoe rock side of shoe gaze. He lets the thump of  bass set the groove again on "Whirlpool" , as sparkles of guitar colors the edges. The pace picks up and the moans of vocals  are broke up with a pained outcry. Thing get more intense in modest increments.

The trudge down a haunted sludge road on "Grief scattered". The guitars are pretty dissonant at times. When the guitar joins the floating groove laid down by the drums, things get a sheen of creepy. They use the two dominant vocal styling to provide an effective sonic contrast. A more dismal howl erupts going into :Coward" but the cloud of ambiance overtakes it. More abstract in it's arrangement it works off more of a primal drone. Several ambient intro pieces break up the album, though might be better served if cut down to something that might color the song for a few seconds. The slow dreamy pulse that captures the bleak moodiness of doom with none of the metallic over bearing once again rules the day on "Missing" that lingers as it haunts you. There are distant screams , but the slow pace drones more than enthralls, if we are talking about traditional songwriting , but her it seems to be a soundtrack to dark places of the soul which I am in favor of.  I will give this album a 9.5, it is one of the stronger offering from the kind of sludged out shoe gaze that is not too common. More doom adjacent than doom.

Email ThisBlogThis!Share to TwitterShare to FacebookShare to Pinterest
Labels: 9.5, At the graves, doom gaze, November is doom, shoe-gaze