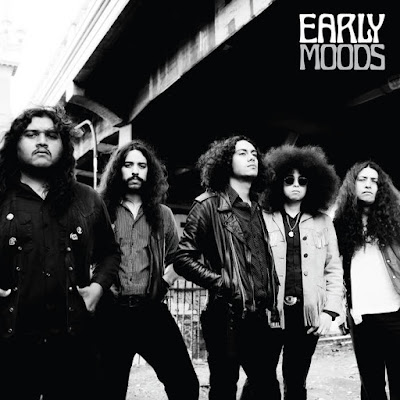 The only thing odd about this young band from Los Angeles is how they are not jumping on some new hot bandwagon, as most bands from the City of Angles that came out after the early 90s. They are in the retro traditional doom, leaning more on the proto side of the sound as the opening track is fairly brisk and owes a great deal to the New Wave of British Heavy metal. The first two songs have a similar feel it is not until they go into the eponymous title track that things get darker and more doom oriented. The singer is competent. The has a plaintive tenor with very little pomp and circumstance to simple melodies. He reminds me a little of the signer from Diamond Head. His voice might be a whole step lower. They pick up the pace into an earlier Maiden like gallop.

"Defy Thy Name" is even more like Diamond Head in many ways, though run through a chaotic filter of a young band trying to combine that with Candlemass. "Lat Rite" grinds out what you would expect from doom-tinged early metal or kids trying to recreate that. It sounds fine for that it is, and they nailed the tiem period they are trying to recreate, but there is nothing that feel all that original here wither and that loses some steam with me the further i get into this album. The continue down the galloping road they have started upon earlier combining the more Maiden like guitar sound with a downtrodden doom feel yet keeping things more on the brisk side of tempos.

"Damnation" finds them falling back in a more Candlemass direction. The vocals are not dramatic enough to capture the feel, but overall, it works. That last song finds the vocals not as fluid as they have been for the bulk of the album, making this not the strongest finish. Not sure how many listens I will give this one in the future, but I do appreciate what these guys are doing as it's an impressive though not flawless debut. I will round it down to an 8.5, as it loses a little team toward the end, but still a fun listen, never got bored with it.