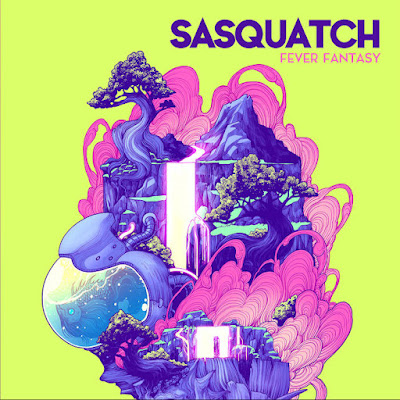 Los Angelos has not been the best poster child for legalizing weed as they have had the worst Covid cases next to New York, and homeless tent cities lining the streets. It had brought a surge of weed worshiping metal bands to the forefront with these guys being one of them. This album come out back in June, but this is my month where I get caught up on this sort of thing since June is dedicated to death metal here.  When I tried to just leave the album playing, I noticed the first and second song just kind of ran together, meaning that the sound of this band is rather uniform.  Belted, blues-tinged vocals and fuzzed out guitar attacks are the staples of this sound.

They gather more of a Kyuss like rumble on the song "Witch" that stands out rather than just blends into the other songs. It has a more aggressive drive to it. The first song that is sonically more brooding is "Ivy". When the band jams their way into this vibe, it is the most effective use of their abilities. There is a hint of grunge to it, and they prove capable of transitioning into a more explosive dynamic. "Live Snakes" and "Voyager" kind of run together in a steam rolling jam of bong powered boogie, the chorus of "Voyager" the only thing that really makes it stand out/ out.  " Part of Not Knowing" defaults to an almost Corrosion of Conformity blend of blues based hard rock.

They continue to barrel down the desert highway with even more fervor on "Save the Day, Ruin the Night". I appreciate this heavy-handed rambling boogie.  It reminds me of a great deal of hard rock I liked in the 90s. They keep their foot as firmly planted on the gas as the do the distortion pedal for the more commanding closing anthem "Cyclops". I will give this one a 9, it's a solid well played album, when I am in the mood for this kind of thing I will probably just listen to Kyuss, but if you are looking for this sort of thing here it is, these guys are good at it for sure.