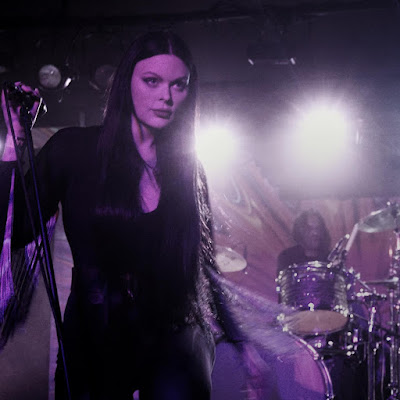 This band hails from the same city in England as Sabbath, but to their credit they are not trying to sound like them, aside from the lumbering riffs. Their female vocalist aides in this endeavor. She has a strong alto and recalls many of the so-called occult rock bands from a decade ago. There is a wider range of sounds that deviate from what you expect from this sort of thing on "Fade into Fantasy". It ambles and throb with a folky strum and a more exotic sonic color of psychedelic. In some ways it is darker and others warmer, a unique sound that owes perhaps more to Blue Oyster Cult than Sabbath. The more traditional doom metal sound emerges on "Broken Stone". It chugs, with creeping authority. Lyrically seems to address a woeful vagabond. The guitar carries the bulk of the hooks, though their singer has some charm to her moan.

The 60's folk rock feel gets dialed up when they take a toke on the "Psychedelic Expressway". it's a brighter more upbeat song, while I appreciate the sonic shift, and their willingness to keep things from getting stale it is not my favorite so far.  They head back in a heavier more somber direction with "the Earth Spins" . A solid song, with impressively nuanced guitar embellishments. Her wails in her head register that are mixed like backing vocals, are an odd touch that litters the album. "Silver" has more of a slither to it, but the arrangement seems like it goes with the flow, rather than sharpen its hooks.

The dig more into the metal on "Teaching Carnal Sins". there is bigger more anthemic rock feel to "Dead Woman Walking:". Sian summons the most sass on this one, it's a fun song. She has perhaps the most sexiness to her voice here, not sultry but carries a carnal charism, I guess the same kind they were teaching lessons of earlier.  I made it through the album and still found myself a little on the fence as to if this is doom or stoner rock, and I am going to lean to stoner rock due to the hippys vibes thought the are the Midsomer kind of Hippies. I will give this a 9, as they are effective at what they do, and do it with personality.