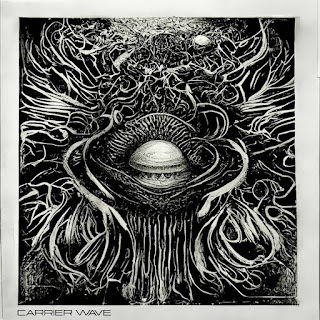 This band is heavier than I thought they would be going into this. They are also slower and more focused on doom, than the kind of smoked out jam fest I thought I was getting into. They are very deliberate with the crunch of the first song, only really stopping to smell the roses when it is time for a guitar solo. It makes more sense for a opening song to be fourteen minutes due to the deliberate pacing. They shift the dynamics and let the chords crush you more when they come out of the jammy solo section. I like the uses of delay on the vocals for the second song. It is heavier and more pounding, though unwieldly in its mammoth lumbering. I think this song has a collection of better sounds, where the first album makes the most of the sounds it does have. Almost five minutes into the song's things get dark and spooky in a very trippy way, which makes for an interesting listen.
"Skyhammer" is lives up to it's name as it is indeed more hammering in terms of the attack the drums pummeling into the song. The vocal bellow along, but the overall arrangement does not feel as fluid. It does have a weightier sound, which is what some people might want from this band.  I think the previous song clued me into that, so I wanted something a little different from them. Their guitar solo seems more off the cuff. It breaks things up a little but hold no other purpose. To their credit this one is under eight minutes not only making it the album's shortest song, but proving they are capable of getting it done in under ten minutes.
The last song brings a trippy haze to things. At ten and a half minutes, it comes close to finding the band getting more concise, as the fat that could be trimmed lies in some of the atmosphere, though the more psychedelic sounds they summon on this one makes it one of the more experimental moments of the album and break away from other doom metal conventions to do their own things. The boozy way the chords are strummed at the beginning of the song is one of the ways they form their own sound here.  I will give this one an 8.5, it is surreal and different, but they could have given the vocals a little more purpose. With that said this is still one of the more original outings from a doom band.
Posted by Wilcifer at 8:21 PM