November is Doom -Thammuz :' Sons of the Occult" 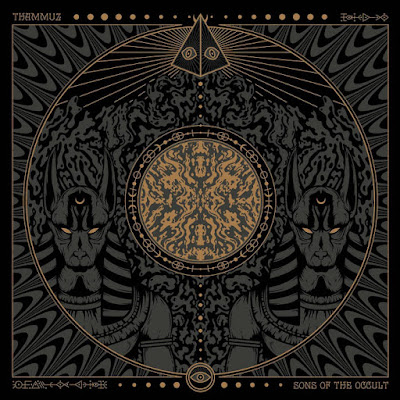 The more I dig into the state of stoner rock this month, I am finding that value is not placed on vocals as much as it once was. These guys are from the Netherlands, so it is not just an American thing. The first two songs kind of run together so it is not until the guitar backs off a little going into "Gauyota" that they really gain my full attention. More nuance to the vocals rather than just sounding like they are a cab driver from New York, might make a difference. They are very capable of doing some interesting, blues-based things, that offer melody and chops without relying on shredding noodling solos.

The hushed tension to "Has Blast' really works well and assembles darker sound that I love. The vocals are more hushed to work with the music. The fact they are capable of that at least gives me hope. The loud to soft, contract expand shift works well, though feels somewhat 90s in execution, which is fine with me. The creepy serial killer vibes to the shuffle of "Self-taught man " is another winner Songs about serial killers are always winners with me. We also get necrophilia which is another winner for me. The get heavier as the song climaxes.

They really bulldoze you with distortion on "Death Songs". It is metal in the same way Motorhead is metal. Less punk, but just as driving, backing off into the blues shuffle for the vocal on the verses. They groove a little more on "People from the Sky".  We have both aliens and serials killers on the same album. When they locked into a more Tool like riff, I wonder if Tool is the influence of the kind of slither Kyuss has been the direction they are going in. There is even more of a grunge feel to "Peyote" . It is a two-and-a-half-minute instrumental that manages to still be interesting though I would like to have heard it worked into one of the actual songs. There is a shift to a more introspective tension again on "Insomnia" though it does build into banging out more of a booming fuzzed out riff. I will give this one a 9, sure the vocals could be better, but the lyrics are interesting, and it has it's own flair.