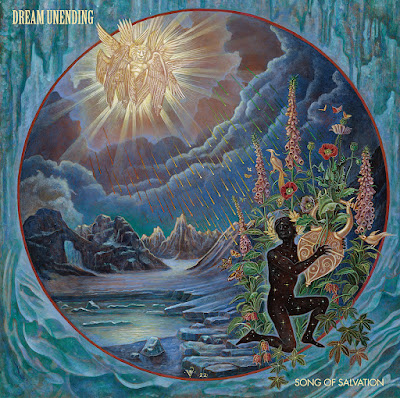 There are many interesting elements in motion going into the opening track of this album. Normally when it comes to what gets labelled as death doom, it's just slow death metal that is perhaps a little more melodic than death metal. These bands often take inspiration from the like of Paradise Lost. This project however seems to be drawing more inspiration from atmospheric funeral doom, Mournful Congregation being the first band that comes to mind. They have woven some really beautiful reverb-tinged guitar sounds that drift over lingering drums and a low guttural funeral doom like growl crawling under it all. Sumerland drummer Justin DeTore handles both the drumming and the vocals.  Tomb Mold guitarist Deirrick Vella shows off some impressive chops on this album.
Shredding aside, the testament to their song writing lies in how enthralled I was by the opening song that I never noticed it was 14 minutes long until I was already ten minutes deep in the song. Stunning guitar continues to be the order of the day on "Secret Grief". There are also woefully sung vocals thanks to Hour of Thirteen Vocalist Phil Swanson. The song does build back into a powerfully heavy crescendo that brings back the growl of the death metal vocals. They prove they can write a fully formed doom song in five minutes which is impressive. Then there is a not quiet three-minute instrumental that serves more as an interlude.  Things continue to wallow in the dreamy swirl of somber guitars going into "Unrequited". This song is another showcase for them to wow you with guitar solos which I normally do not like, except they do it with so much class that it is not masturbatory.
"Ecstatic Reign" is another mammoth sprawl that is just as epic in scope as the opening track. Female vocals float in with ghostly ease, after as more primal roar starts off the song's narrative. At the six-minute mark things begin to get real metal again. There is a riff in the midst of this that reminds me of the build in "In My Darkest Hour". They simmer back down into the more depressing deliberation that the genre is known for, I love when doom is juxtaposed with beautiful passages as it not only brings the crushing contrast of the metallic end of the spectrum with greater dynamic punch, but it shows how emotionally complex death is as a subject. The end of life being the end of suffering. I will give this one a 9.5, as some of the instrumental section could have leaned less on sound and more on song, as the proved they can do both, but perhaps that part will grow on me.
Posted by Wilcifer at 7:15 PM