Sharon Van Etten: "We've Been Going at This the Wrong Way" 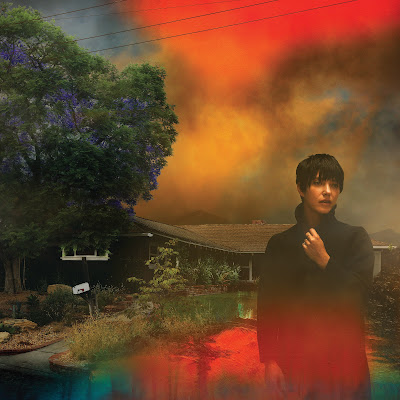 Catching up with album released earlier this year. The one originally came out back in May. She continues to perfect her brand of atmospheric folk rock, with a great dynamic build on the opening track. Piano plays a more prominent role on the second song. Her voice holding a hushed tension. The beat to "I'll Try" gives things more motion as it moves in more of a pop direction musically though her rather stark melodies do not follow this line of thinking. I find myself as I review this album having to keep a tally of when it falls in a more folk direction than a pop one the further, I progress into it. This differentiation is easy to make on songs dominated by the strum of acoustic guitar like "Anything". Though the dynamics do give it more sonic heft.

That is not to say a more languid form of balladry is not another sonic color he uses , often near the sonic zip code employed by Lana Del Rey, though perhaps not as lounging on the California beaches, though she did move to California from New York, so it makes me wonder if she would have made the same album on the east coast. It does swell into a impressive almost symphonic climax.  Things get surprisingly heavy on "Headspace' which has a more industrial pulse, in how the beat hits. Then it's more folk for the dreamy "Come Back".  The lazy dream filled mood, is pleasing to the ears, but not as interesting in its arrangement until the other layer of vocals and the drums kick in. You can hear a touch of country influence under the surface. Her voice is projected with power when she belts it out while maintaining the vulnerable tremble, not unlike the approach of Thom York or Roy Orbison.

"Darkish" is thicker on the atmospheric folk feels than the hooks, though she jerks back in a more tense indie pop direction with the song that follows it. The meets the middle ground of these dynamics on "Far Away", which reminds me a little of Zola Jesus' more organically ambient moments. "Never Going to Change" cover similar ground but has a more urgent vibe to the melody. Then there is almost an 89s tinged pop feel to "Porta" , her voice bends around the beat with an emotive waver.  "Used to it" floats on a dreamy wave of ambiance, though it not the album's catchiest song, however it works for what it is intended to do. Like many of the songs on here an electric drumbeat, propels the dream laden musing, that float like dark cloud around the silver lining her voice brings.  I will round this one up to a 10, wish I had found it earlier in the year, as I was reviewing the album I kept a tally how many songs were folk and how many were pop and the folk side of this album beat out the pop side by a margin of two, moodier than most pop, if you like beat driven folk or reflective pop then this album is for you.