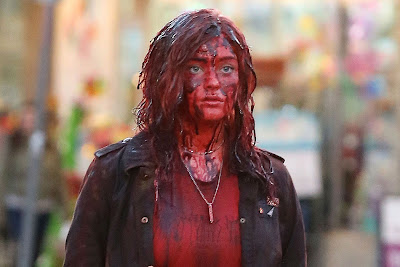 I have dedicated a month to most of my favorite sub-genres of music.. Goth in October, Doom in November and black metal in Febuary, in honor of the folk band's name I am giving June to death metal. Death metal  may not be one of my favorite genres now, but it was when I was a teenager which was before black metal as we know it was a thing. Death's "Leporsy" album was the first death metal tape I owned. This was followed by Morbid Angel's "Blessed are the Sick" . I saw them on that tour and Unleashed opened so I bought their album. Followed by Carcass and Sepultura then Deicide's first album then the flood gates opened . I was also really into Nocturnus, Acheron and , Cancer.  The theme here being I was realIy only into satanic death metal. I  growled for a death metal band after high school. During this time things began to get more interesting as death metal started to take chances. Bands like Samel, Tiamat and Hypocrisy began to get both darker and more creative. They opened the door for me to get more into goth, I was listening to 45 Grave, Christian Death and the Cure at the time.

Now decades later the problem seems to be it all sounds the same. There are exceptions to the rule. I have a top ten death metal albums of the year list still going, so some bands are still pushes foreward. I do like doom and black metal better as there is more room for emotional expression that is not just anger. All to often I have to use the analogy that death metal colors with just a blood red crayon so leaves little room for dynamics in the monochrome aggression. If you want just brutal death metal, then you are going to be wasting your time. I like for death metal to be heavy as fuck, but also care about the songs and at least use varied shades of red. If you are into tech death you are also going to be disappointed by my choices this month because, that is my least fovrite genre of death metal. I do like some progressive elements. Old Opeth is fine with me I can hang with them up to "Watershed" then I think we can agree they are no longer death metal.

What I am looking for is not the same old same old. Bands that are doing death metal differently. I have already started sorting through new death metal albums and the first review is death metal well done , but not breaking any new ground so that is going to be the only tried and true formula album I am covering. I will take a look at the top 50 death metal albums of all time and in doing so looking back in anger at some of the classics to see how well they have stood the test of time. I think death metal is very timely as the world burns and society collapses it is the sound track to the apocalypse we need, every thing must die.