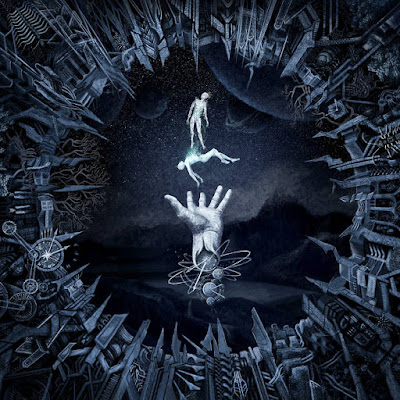 This album has a huge sound. It is also well executed by musicians who are skilled at their instruments. By the third song it is all beginning to run together, so while they have honed a sound, the song writing is almost not there. We are talking grandiose blasting, but only marginally different melodies hidden in the blur. Most of these are thanks to the key board. The screamed vocals are often mid-ranged and follow very similar patterns. Dimmu Borgir may get a great deal of criticism in black metal circles for being sell outs, but even their last album which just pushed past being mediocre for them is head and shoulders over these guys when it comes to song writing. Are these guys more legit when it comes to black metal. I mean Hellhammer has played for Dimmu so despite of what you think about them it sets the bar high, but to a novice listener with little understanding of the history, sure.

"As the After Becomes the Before" makes a modest attempt to set it self apart. I can hear that there is a more defined guitar riff here. Are these guys different than what I typically think of when it comes to black metal out of Finland? Yes. They are not Horna. I might prefer Horna. The double bass almost sounds triggered here. These guys are more of a machine than Horna, but I can feel what Horna is doing more. Why do you keep comparing these guys to other bands/.  Well what they are doing doesn't stand out from other over produced blast beaters. If you have been waiting 18 years for this album , you need to get a life. They did pick up right where they were 18 years ago , but is that a good thing or stagnation?

A more accented pounding  two songs after the title track gets to me check back into the album. "Oscillator Epitaph" might be the album's best song. It sets it self part from the rest. There is a keyboard interlude, that tries to pass it self off as an actual song. It is followed by some more dial by numbers symphonic black metal. The drumming on this one however is less annoying. I will give this album a 6, well made but otherwise empty.