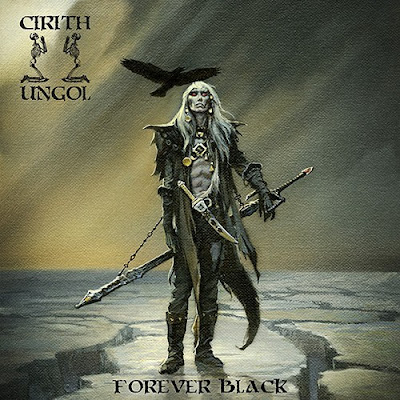 How can I resist an album about Elric? If you do not know who he is , go look up Micheal Moorcock. If You do not read epic fantasy why are you even interested in this album? I have not listened to a ton of these guys in the past.  It is funny they are making an album with an Elric theme and they are named after a place in Mordor, when Moorcock hates Tolkien. What is a bigger deal is this is the first album this band has put out since 1991. These guys get lumped in with doom bands when they are big epic classic metal. Closer to power metal than doom. The vocals are aggressive, well more aggressive than power metal. At 63 Baker is giving all that is in his ball sack in this performance. Can you hear the wear and tear the years have given his vocal chords. Yes. Perhaps if he stayed more active he would be in better shape , it's pretty rough on "the Fire Divine". The funny thing is the comments on this Youtube video are idiots saying how great his voice sounds.

Do they sometimes sound dated given the nature of what they do ? Yes. They are still very good at what they are doing, strained vocals aside. The drums could have gotten more love in the mix , but this is clearly about the guitars. His voice does sound better when he drops down into more of a croon on "Stormbringer".  The guitar solos are well done. They are not bringing much to the table that you have not heard from someone busting out penatonics with their foot on the monitor. The chorus is really rough on this one and kinda kills it for me. I know fans will get butt hurt about his voice and try to make excuses , here is what I have to say about that ....KING FUCKING DIAMOND .  He is the same age as this guy and sounds way better , hitting higher notes .  Baker should have taken a break from the Dungeons and Dragons to sell his soul to the devil. I went back and listened to a live show from 84 and he did not have a lot to work with to start. The bar was low, so I can see where their fans are easy to please in that regard.

"Nightmare" has some cool guitar work and more of a Twisted Sister like vocal hook. The lyrics are kinda just heavy metal Adlibs. There is more of a W.A.S.P like feel to "Before Tomorrow". Blackie Lawless writes catchier songs. I would say this is heavier than W.A.S.P. It is very straight forward or as they used to call it back in the day no frills heavy metal. This approach does not stay fresh all the way to the title track. The vocal being devoid of melody and just a drill sargent caterwaul doesn't help. I think the guitar being so strong and the raw nature of what they do compensates for the vocals so I will give this one an 8. It started strong and ran out of steam. They are good at what they do even if that means sticking to their guns as the where music has gone left them behind. But metal is entrenched in nostalgia so it should please their fans.