What is This That Stands Before Me ? : Sacred Bones Black Sabbath Tribute 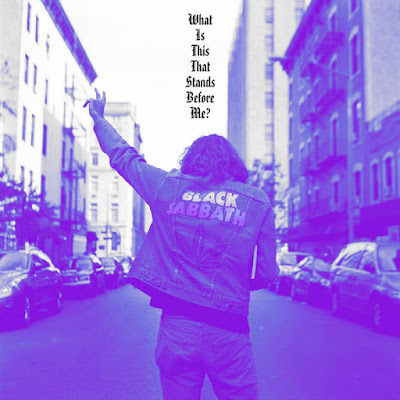 This is an easy sell. Sacred Bones a label who has kept the new wave of goth alive , takes the artists on their roster and does a Black Sabbath tribute album. Up first is the Soft Moon, who almost nails "Black Sabbath" , the groove on the "coming round the bend" section of gets lost in the murk though they get heavier at the end. The only artist I was not familiar with was Russian synth wave act Molchat Doma, who gets props for taking on "Heaven & Hell". The bulk of Sabbath tributes neglect anything that is not Ozzy. The guy is no Dio. Singing in his native tongue , well I guess this would be a good way to learn a little Russian since I already know the words. The spoken part is a little meh. I do not see these guys listening to a great deal of Sabbath in their free time as it sounds like the are more into Kraftwerk. Thou is the heaviest band here, so they have to nail "Supernaut" which might be the easiest song here. They guitar tone is pretty mean. They use snarled vocals .

Of course Marissa Nadler is going to knock "Solitude" it seems like an almost too obvious choice. I would have spaced Hilary Woods out from Nadler , maybe had her second to last as their styles are somewhat similar. Though Nadler has more of a country thing going. Woods proves to be more atmospheric, as this song is almost not there. If I was her I would have played the bass line with the left hand on the piano. Zola Jesus doing changes is also very obvious. But she sings the hell out of it. If I still smoked pot I would find Moon Duo's take on "Planet Caravan" more compelling. There is actually more going on than the Sabbath version. Dean Hurley does what he calls the bar band version of "the Warning" . The feel of the song is there.  Not familiar with this guy so I am impressed.

Energy wise I know what I was going to get from Uniform doing "Symptom of the Universe". I that the vocal were going to be more of an issue. He is doing more of a punk shout , yes he is a little flat but it comes closer than I would have expected as the vocals are always a sticking point with those guys. I will give it an 8.5 , as the obvious choices that gave it a mellower mood could have been darker. I should not have to say it could have been darker when it comes to Sacred Bones artists.

Email ThisBlogThis!Share to TwitterShare to FacebookShare to Pinterest
Labels: 8.5, album review, black sabbath tribute, Marissa Nadler, sacred bones, The Soft Moon, Thou, Uniform, What is This That Stands Before Me, zola jesus