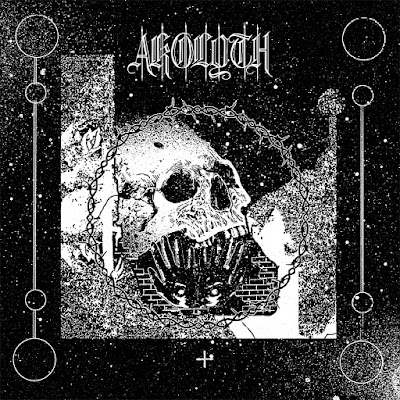 The painted corpse of black metal has been beaten into submission in such a way that those clinging to yesterdays blast beats are urgently hoping any band will be the one to breath new hate into it. Such were the words I was reading in regards to this project. I clicked around hoping some one would be doing something different and pushing the genre forward.  The debut effort from this band that is other wise shrouded in the cvltic anonimity. The novelty of the murky dark whose blast beats sound to be recorded uses a drum machine begins to get stale by the second song which is more of the same. You know how I complain about bands having a sound but no songs. Here it is again.

The vocals are a strangled gargle. Which sounds good, but what do they do to contribute to the song ? Not much. Especially since they are growling the same way as they did on the first.  I guess some might be pleased they recaputring the 90s sound. But has that not already been done to death?  The second song does find the rift shift toward the end of the song rather than just beat the drone .The vocals do improve going into the more stomping "What Dwells Betwen Fractured Worlds". The good thing they had going gets spoiled by blast beats that sound like hive of murder hornets high on meth.  Mayhem has already done this sort of thing and with better drums.

I like the title "To Become His Doorway" .  It would be a good horror movie. They drill into this one almost more like death metal. It is single minded in it's aggression and lacks mood or atmosphere which are key to black metal. There is plenty of torment going around so not saying this is not legit black metal, just not bring the things I want from black metal. I will give it a 7.5, not the worst thing I have heard , but not the future of black metal. Being released by Amor Fati.