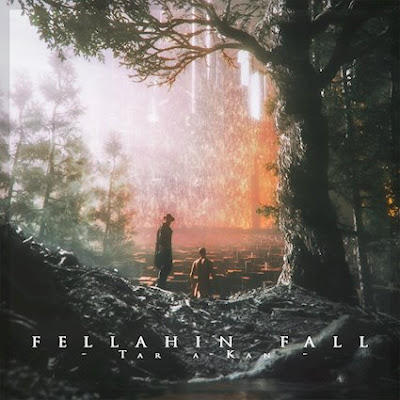 This band from Brooklyn was hailed as being industrial , but it comes closer to mainstream nu-metal. More hard rock than metal. The vocals are more nu-metal, not unlike Godsmack or Breaking Benjamin, the difference is the grab for radio play is not awful. God Smack is fun, I can handle them. Lets hope it stays out of the Breaking Benjamin side of the equation. The baritone at it's best makes me think of Woods of Ypres. I would have really dug this back in 1999. In fact I was in a band kinda like this around that time.  But had come from punk and death metal bands so were more aggressive. These guys started as a darkwave band. Now 20 years after the rise of Hot Topic we have these doing this with beats closer to trap than Ministry. The vocals do get out of the baritone bellow on " My Hallow" which is more introspective not unlike the power ballads Cold pumped out.

Most of these songs' fate lies in the vocals . The guitars ride their middle of the road plodding chug.  Some of the vocal melodies are pretty decent, but it does make me just wanna listen to Woods of Ypres. Their drummer is really skilled and that aids the songs for sure. The flourishes of double bass are pretty tasty choices. "Bind" is pretty average in every way possible. Metal should not be average. These guys are just melodic hard rock with a dark streak, but even those bands should aspire to be heavier. The keyboards are more dominate. The electronic elements break them away from the more beer rock leanings of the Breaking Benjamin sound, and comes the closest to being industrial so far. The vocals are not as interesting as they have been on previous songs.

There is a more power ballad feel to "Tomorrow's Mourning" . One of the best songs due to the varied juxtaposition of sounds is "Rover" it marries a dancey beat to a solemn melody and the album's most thoughtful lyrics. I will round this one down to an 8 for some of the vocal choices, but these guys have potential and if more mainstream alternative rock with an electro grunge feel is your thing then you will be into this more than I am.