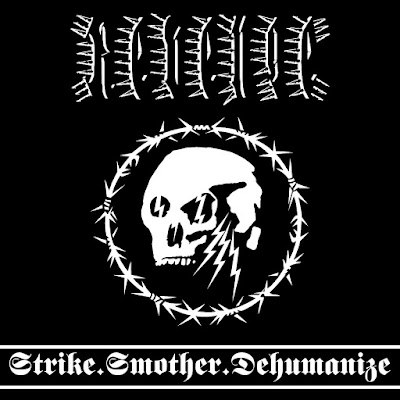 The rabid attack of this Canadian band is more grind core than it is black metal. It's more death metal than it is black metal if we are calling it like it is here. They hit you with a stunning sonic intensity and aggressive that impresses upon the first attack , then after that I find myself ready to ask what I ask all extreme metal bands

I get you are heavy, but can you write a song ?

I am not sure songs are the point of what is going on here. I think it is how memorable of a beating they can give you. The assault is more straight forward on "Reign Power" . The snarling vocals are feral layers are abrasion. They hold on real point. There key is can a riff hook you amid the blasting chaos? In speedy three minute explosions they give themselves more time than if they were an actual grind core band. Can I tell the difference between these song called songs is another test this album is put to. "Oath Violator" breaks things up with a dirty bass tone that is allowed to ring out , but find them rather monochromatic in terms of dynamic. There is a sub sonic low growl taking place that sound like a gurgling pig in hell. The drummer of Death Angel woke up from his Corona coma to say he did not think Satan was cool any more , because Satan was a woman who punished him for sloth by turning him into a Jabba the Hutt like creature who was made to violently vomit blood until he woke up. Those grunts are what I imagine that creature sounding like upon it's bloody vomit. Sure they have songs like "Salvation Smothered" but even these guys are not professing their love to She-Satan is a way that makes it known here.

Why would Satan punish someone for sloth ? After all should not sins be rewarded in hell? The Jehovah god is punishing people for sinning by sending them to hell. So what would demons get for being on God's payroll, that would make them subcontractors and not adversaries . These are the kinds of thoughts this album inspires. Death Angel's drummer did say he would not stop listening to Deicide despite not finding Satan cool anymore. He might also dig these guys. They are not death metal in the strictest sense but offer single minded sonic sadism. They jerk you around on "Human Animal" The vocals sound more animal than human at this point. There are some punches on this song that reaffirm they are doing this on purpose. Shit they almost groove going into "Excommunication" , but then go into full rabies freak out mode. "Lightning Mythos" is explosive , but doesn't add to any sounds or methods of attack , really only confirming their drummer is a mad monster of a man.

"Self Segregation" is very Napalm Death. But with more death metal to the drumming. I always though it was weird as a kid that Napalm Death was not actually death metal. "Death Hand" finds them leaning more firmly towards death metal and less grind core/. I will give this album a 6.5. It's the heaviest album you will want to listen to this year. That is not to say some band will not attempt to make a heavier album, they will. You just will not want to listen to it as this pushes the bounds between noise and heavy.  You can thank the sadists at Season of Mist