Pale Divine : " the Consequence of Time" 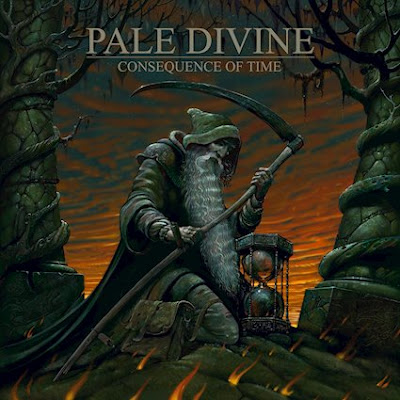 Over the years I have my my thoughts clear about power metal. I like the bands who inspired it , but the more recent take on it is typically too happy for me. As an avid player of Dungeons & Dragons I am the target audience. This morning due to current situations making others in my party less than eager to get out and play I have taken to playing a video game version and wanted a sound track for this.  I often get promos from record labels where there are multiple album on a single email so after two albums where the first song did not make me want to peruse them further these guys caught my ear. They have been around since 95 so know what they were doing. They got their start as more of a doom band and evolved into power metal. The first song has lower vocals and more attack to the guitar that is very Judas Priest, yeah even the vocals think of when Rob croons on their first few albums. It was an automatic winner.

The second song had shades of Iron Maiden's "Prisoner" in it's groove they also bring to the table influence from both Deep Purple and Rainbow. Some of this gets mashed together in more of a rock boogie on " Shadow's Own" that doesn't resonate with me as strongly. The higher vocal and smoother melody make me think of Deep Purple despite the more nuanced chug. The higher vocals might not be as strong , but are still more soulful than the operatic attempts of most power metal bands. The bass rumbled on "Phantasmagoria" in a manner than shows they still have a little doom to them. The melodies are more hopeful almost like Uriah Heap. They pull out a fucking killer riff on the title track. I say cool riffs alone does not a good song make is the rule of this blog, but they make a killer song out of it so this is what to do with a cool riff/.

They step on the gas with proto-thrash for the chug of "No Escape" which is pretty straight forward , like Diamond Head with more balls in the vocals . Yeah I guess that equates "Kill'em All". Fun but not the most interesting song on the album. There is a darker tone to the last song. I guess if you are hoping this band would go back to doom, this album might be a turn in another direction, but they prove more than worthy for the direction they are going in. The array of vocals colors add to the album's magic .I will round this up to a 9, it's cool to hear some straight up metal.