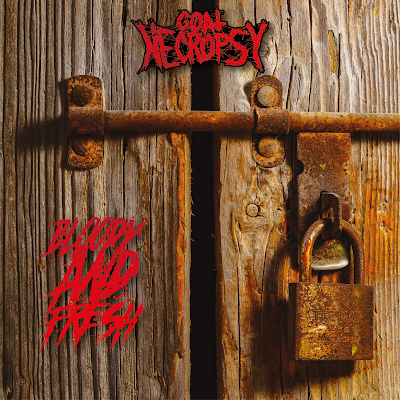 If you ask me if I like gore grind I will tell you I like pre- "Heartwork" Carcass. To kids these days that might not count, but that is where it started. The reason I have not invested much into this sub-genre that falls somewhere between death metal and grind core is it tends to sound like shit production wise. That is a problem this band from Brazil doesn't have. They also can play their instruments well, rather than just bash at them with as much gain as they can muster. The higher pig squeal vocals might not be my thing, though it does seem to be a staple of this sub genre. I would say these guys care more about groove and song writing than having punk rock seizures so they are firmly on the death metal side of the equation even with the pig squealing.

The album closes with "Devoured By the Hounds" . This song is  possessed by a pretty solid chug. I would suggest listening to this song with head phones as it brings out the drums , which on first listen were buried under the guitar. I stopped and put head phones in an now it makes more sense.  I can under stand the lyrics to this one better. I can also make out the bass which I did not listen for earlier in the album. The syncopated break down is pretty powerful and more of a metal core moment. Another sub-genre I do not give much time to unless it is say Converge. This album was a pleasant surprise.  Not something I would have sought out due to my preconceived notions about the genre, but I enjoyed. I even developed a tolerance for pig squeals over the span of these four songs. I will give this one a 9. If you are already into this sort of thing then it is a must to check out when it is released May 12th.