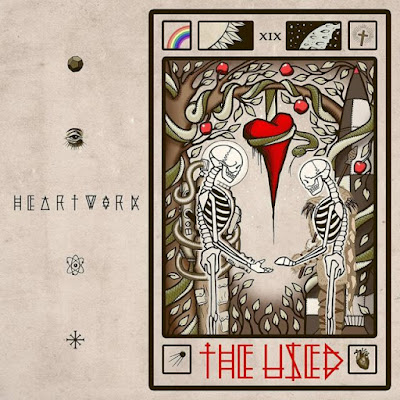 Wait a second, I have all these so called former "scene kids" on my time line and no one is going to bring up the fact the Used's new album is a total pop record? So I guess you were just into the feathery bangs ?

Now the question I am going to answer is …"But is it good pop music" .

Obviously they do not make music in a vacuum . They have record label's to appease. Panic at the Disco! made a leap from being a Myspace emo band to a hug pop band. These guys wanted in on the band wagon. They wanted to do it with out totally alienating their fan base. This is first two songs are more pop punk. The singer Fever 333 helps them out with some lite screaming. "Big Wanna Be" is the first pop crossover. It is a decent song unless you are hoping for them to re-open a box of sharp objects. "Bloody Nose" doesn't suck either . Is it the band at their best ? No , but I can still accept this if I am being open minded .  "Wow, I Hate This Song" is when things go side ways. It sounds like they wrote it for a Muppets musical.

I am not opposed to electronic elements. I am opposed to wishy washy song writing. I am opposed to things getting as happy as they do on "Cathedral Bell" . They should have told their producer to save this one for the Weeknd. He would have done a better job. There is no way to make excuses for what happens here. Bert McCracken's voice does sound better. He is doing more with it from a singing perspective. "1984(Ifinite Jest" does have a pretty cool bass line . It reminds me of the Issues. Then things do not work as well for "Gravity's Rainbow".  Production wise they are going for the Panic at the Disco thing, no way to deny it. We are back to more electronic pop that is even dancier than before with "Clean Cut Heals" . Another one better suited for the Weeknd. As a song it is better than the previous one I said this about.

The title track...I am not going to rant about the Carcass album of the same name that came first. It's just a spoken word interlude. Bert's lyrics were never good enough to merit this to begin with. As far as pop goes "the Lighthouse" is the first that I really dig on this album. Mark from Blink 182, another sell out is in on this. Lucky for them I like pop music. The Blink 182 connection doesn't end there are Travis Barker appears on the song after than, which doesn't work as well. It is kinda boring. The singer from Beartooth shows up on "the Lottery" . "Darkness Bleed" that comes after it is far more interesting. I had to listen to " To Feel Something" three times in order to feel something about it, at the end of the day it reminds me of  "I Don't Want to Live Forever" by Taylor Swift. Which coming from me is more of a compliment than intended. I will give this one a 7, I know these guys can do better .