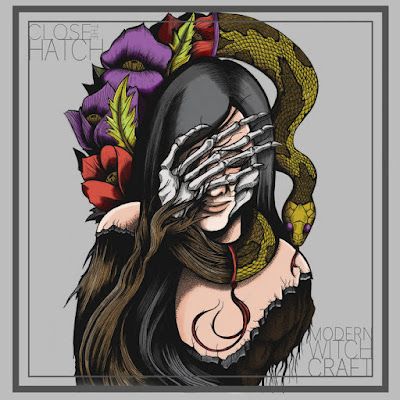 Shoe gazing sludge is going to be something I am on board for. The vocals are not the typical lumber jack grunts. The are dreamy murmurs that are the most atmospheric part of what is going on with the first song. If the Melvins got smacked out and decided to record while taking sleeping pills the results might be similar. They pack a punch even with the sluggish slumber creeping up on these riffs. The vocals have marginally more grit on a song like the title track where the narrative gets more serious. They are not a droning or hypnotic as say Jesu, but not far removed from their sonic zip code. Very syncopated in their rumble. This is one of the more interesting sludge album I have heard this year.  This is not dark or depressive like doom. It is introspective, where doom is mournful this is apathetic.

They are not afraid to get weird, but still stay focused on the songs. Often angular, they slide through surreal walls of feed back, yet the songs have a spacious feel to them. The vocals continue to have a slacker vibe to them. Going into lower moans at times. In places their is a sleazy Marilyn Manson like swagger to them. "Cordial Medusa" is more listless. It wanders into gray places and forgets. There sound however is so unique that it compensates when they get lost behind their own smoke and mirrors. "Thorazine Empire" shows how to do the 90s spawned loud to soft dynamic. They key is when you are not doing it all the time. So it works great here. These guys are not sticking to formulas. When they pull more conventional tricks out of the bag they work like they are new. The surreal sluggishness digs in deeper to the sonic coma of "Persona Non Grata" .  The way the shoe gazing feel ,creeps in is impressive because it is more of a feel thing than them trying to be My Bloody Valentine.

The last song works off the vibe they established in the previous song and gives it more movement. The guitar tones on this album are stellar. It took me a little while to get used to the murky mix but it makes sense. There is no growling , but they do talk in low creepy voices to get the mood more ominous. But when I lose track of where I am at in the song it is easy for the press stream to get going and then I realize I am back at the first song. So yes there is a uniform feel to their sound, but I also can just leave this album on and let it play. I will give this album a 9 and see how it grows on me.