Looking Back In Anger : Motorhead's "Ace of Spades" 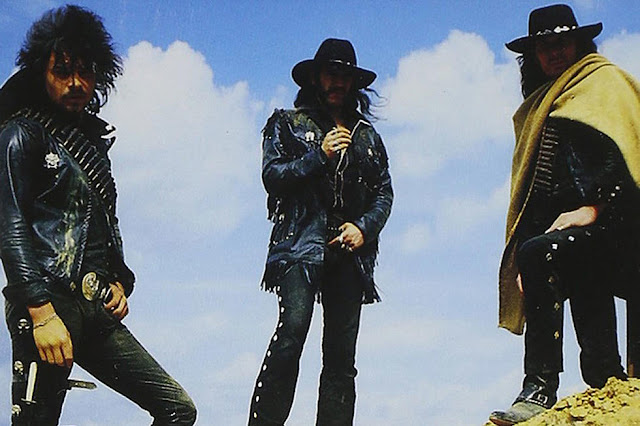 It' was  Motorhead day, so it only made sense to look back and see how one of their most popular albums holds up over time. The 1980 album many pedestrian Motorhead fans own is actually their fourth . It broke them to bigger audiences with the title track that opens the album, but what about the other songs on the album. Have you even listened past the first song? We are going to see how this album is as a whole. Lyrically "Love Me Like a Reptile" muses similar themes they would return to on "Killed By Death" in 84. I think "Killed By Death " is the better song. They are like a more meth driven version of AC/DC on "Shoot You in the Back" even more rough around the edges and raw. The fuzzy rumble has more groove than the previous song so works for me.  It does make sense why Motorhead is the one "Metal" punks seem to latch onto. Though this album is more just pumped up rock n roll than metal. "Live to Win" works off this energy with it's street wise charm.

" Fast and Loose" has a great deal of swagger. Lemmy does what he does. The guitar carries more of the song than his snarling bass. Next to the title track "We are the Road  Crew" might be the most iconic on this album. The song writing just clicks here as they are not doing anything dynamically different , but allowing the vocals to sit on the bounce of the guitar marginally better. There is a touch of Jimi Hendrix influence on the guitar going into "Fire Fire Fire".  Fast Eddie Clark is an under rated guitarist. Animal Taylor also shines on this one.  Gang vocals on the chorus lend more of a punk touch. "Jailbait" is the most metal song on the album. Can you imagine if this came out in 2020? The Me Too crowd would lose their shit. I wonder how many of them own this album, you know like the Instagram punk chicks? They probably have not listened past "Ace of Spades" to look cool at parties.

"Dance" is a reckless rock n roll that numbers itself self along with the previous song as one of the albums best cuts. While "Bite the Bullet" is pretty much run of the mill rock n roll, "the Chase is Bette than the Catch" is the albums best song. It has more of a metal chug to it while lending itself to be one of the album's most melodic songs. "the Hammer" is pretty much more of the same from these guys, what you expect from typical Motorhead, so almost filler. I will give this album a 9, so not the masterpiece it is painted to be, but pretty fun album none the less. They have better album both before and after this one came out. Popularity does not account for quality if we are talking about what is truly the band's best album.