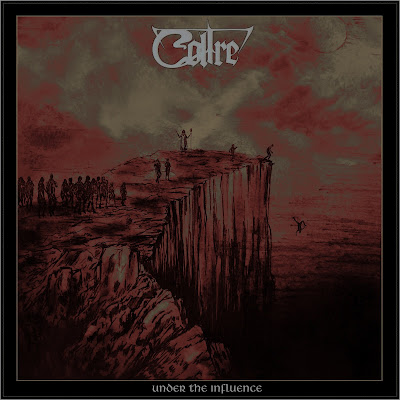 Following the tire tracks left by bands like Thin Lizzy and Rainbow, this British band has a rawer and more aggressive spirit to them. Perhaps not as dark as In Solitude who has more of a Mercyful Fate going, these guys are in the same sonic realm. The boldly belted vocals are more Diamond Head than King Diamond. There is also more of a gallop coming from these guys . They also employ the New Wave of British Heavy Metal sense of guitar harmonies without coming across as frolicking power metal. The vocals are boldy belted. "Crimson Killer" has more of a rock n roll swagger to it. They go more hell bent for leather in fist pumping granduer of "Fight". The guitars are the focus of the spot light most of the time here. The vocals are solid, but sit on the riffs rather than the riffs being fashioned to accomodate them. The first time the vocals get more thought put into them production wise is going into the second verse of this song.

The riffs might not be the most original things ever written in their devoation to the era of inspiration, they are however preformed with convincing attitude. I have not seen what these guys look like but I am expected their hair to be feathered. Things get heavier with the more intense proto thrash gallop of "Plague Doctor" which is lyrically timele. The way the vocals fall is more along the lines of early Metallica, which also falls back to the Diamond Head comparison I made earlier. He is not as angry and Hetfield. At over 9 minutes it is a rather ambitous piece guitar solo and all. Things stay very uptempo aside from the more melodic break down in the middle of the song.

They are splitting the difference between metal in the more traditional sense and rock n roll on the last song. Kids these days might not think this is metal at all as it takes you back to the late 70s early 80s when the definition was different. I did listen to lots of old Judas Priest as a kid and the riffs here owe a great deal to those days. Guitar solos take up the space where the vocals would fall in this one. It is more about a sound than being a song. I am not sure flashiness is the best justifacation for an instrumental, then there is Edgar Winter's "Frankenstein'. This is less about groove and thrashes along on cruise control. I am sure this is fun live. I will give this one an 8 and keep my ears open for where these guys go from here. This is being released on Dying Victim Productions July 31st.