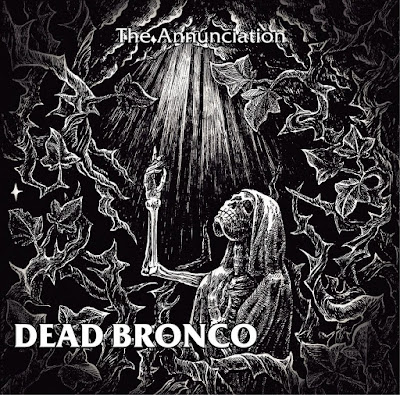 Perhaps the music business has always used the tatic or rebranding old band wagons in favor of hipper ones. This project is cow-punk. Dark cow punk. Calling it Black Country or what ever can be misleading. It is rowdy. There are a few snarls here and there , but the vocals are crooned with a fair amount of twang. Is Danzig an influence ? Yes. But Danzig was once punk, back in the Misfits. This is less pop punk than the Misfits. Horror punk ? sure I can live with that as well. Tension of post -punk, well if we are talking the Birthday Party ...sure. Labels aside the music is entertaining. Listening to guns and explosions from the riots going off as this plays in the fore ground, so there is a bleak end of the world feel to this that I need. There is more of a folk feel, that will appeal to fans of King Dude on the song "Make Me Sick".  The pace picks up for "Been Saved". It is more burly and noisy than the Cramps, but in the same deranged trailer park.

There is a more melodic sway to "Do Us Part". It proves he can sing if he wants . "What Have You Been" is more explosive. Does that make it in any way black metal? No. There is an ominous mood, but not hateful darkness that black metal summons. The vocals are sometimes more of a punk rank than others . One of the more ranting moments would be"Mutinous Skin". He does go back to more of a crazed country croon. His vocals are dynamic, which I can appreciate. They do not draw you into the songs. The King Dude contry vibes come on darker with "That Devil" . If you have a song referencing demon hounds it better be dark. Black metal is touched on with " suicide is all I think of" , but that does not mean this is a black metal album. There are a few screams but it is mostly an interlude. Then it is back to aggressive punk ranting .

The title track finds the sound returning to more of a black metal undertone. It has some of the best guitar and drumming on the album. Despite this not being a black metal album, and I did not actually need it to be one, I enjoyed what I heard from this. Is it the most original things ever  No. Is it a fun album and I wish there was more punk like this or better , yes. I will give it an 8. Released on Sun & Moon Records.