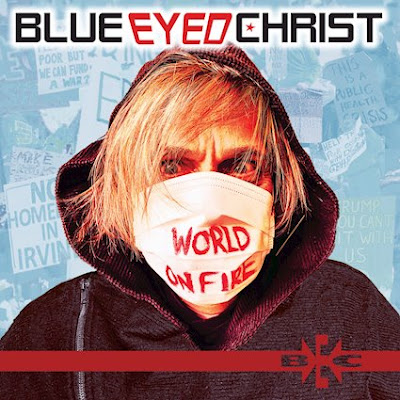 his project goes for the 90s industrial sound. More like "Pretty Hate Machine " Nine Inch Nails than Ministry, or one of the many bands that tried to jump on the Nine Inch Nails bandwagon , like Filter or God Loves Under Water, though less rock n roll than Filter. Lyrically this dystopian ranting is very timely. Sadly all the anti establishment rivet heads I knew are now showing themselves to be poseurs and hiding when the government says "Boo!: these days . They go in a more Thrill Kill direction when the female vocals join them on the chorus of "America H". There is a pretty slinky bass line for this for the main sing song almost rap over. Somewhat "Down In It" .

"You are referencing too many other bands in this review, that is bad writing " you scream.

When you wear you influences this plainly on your sleeve you can not help but notice. If you are not aware this is happening and you think this is original then that is a problem. If not then know this is likely to be pointed out. "Manic Adderall' is less hooky or melody focused than the previous songs. Vocally this guy has little in terms of range to work with this more rap like spoken approach. This makes the need for groove more important. I think this project would benefit from more varied vocals and collaborators to add layer to the sound. The guitar riffs are driving, but very simple and the distortion sound is rough. I would have more effects on this guys voice. They become tiring by the time we get to "Take it to the Streets". There is an attempt to be darker , but it not effective. There is little in the way of groove which is what they need. Mea Fisher from Lords of Acid, is on the title track, which is what this album needs more of .

"System" is in two songs a part one and two, but it might as well be one song. Lyrically it is becoming redundant at this point , Killing Joke does it better. "the Wait is Over" is a pretty good song, and goes to show this project is capable of more than what we have gotten for the bulk of the album. "Slow Reverse" also shows what works for these guys. I think the bottom line is this album could have been darker and more experimental. I grew up as a teenager listening to this n the early 90s , I love industrial music because it is dark and experimental . I will give this a 7.5, if you did not progress past 95 or were never there for it then you might dig this.