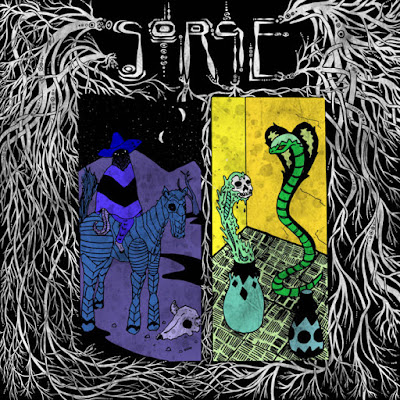 If you are a regular reader here then you know I normally review albums in real time. Typically as I am listening to them for the first time. 90 percent of the reviews are done this way. If I sit on an album and give it multiple listens before reviewing it, then it's a good sign. That is what is playing into this band's favor.  The fact they are solid doom band that stands out from the others is also good for them. I love doom, November is now dedicated to it. It is one of my favorite sub-genres of metal with black metal neck and neck with it.  On their debut album guys take what works from the genre and make it there own. The vocals have a wail that falls in between King Diamond's mid -range  and Ian Astbury. Midway into the song they find a pretty solid head banging groove. This is more of the head banging of old , pre-death metal. There are some funky 70s inspired sounds here for sure, without this being a total Sabbath worship. They serve the song while giving themselves room to have fun and jam.

The second song is darker. It lumbers with more sinister intent than the first song which has a more lets take Acid and party in the Camaro feel.  This makes sense as lyrically there are drug references in the second song. The vocals are more intense crying out more dramatically. They hammer at you with larger sonics. Even building into a blast beat at the end. Though not going black metal with it. "Argent" is heavier and more doomed out. The space sounds still drip from the corners of the song. The vocal melodies are not as catchy as the first two songs , but the heavier music seems to balance it out. The guitars are well layered and pretty crushing. There is almost a sludge weight to how they come down upon you.

The last song they lead into with a slinky palm muted creep. The drums bring the groove and they keep the cosmic weirdness going. Pretty much all the elements I dug in first 3 songs at work here. This is not to say all the songs sound the same. They do not. In the past year I have been complaining too many bands dial in a sound, but do not have songs. These guys are a solid example of how to do both. The vocals are more belted than crooned on this one. The spot light is on how  these riffs killing you. Their singer also plays guitar so that seems to be more of his focus on the past two songs. I will give this album a 9.5, not perfect in my mind due to the vocals taking more of a back seat, but I am a singer so that tends to be my focus. If you are a guitarist into doom then this might be the perfect album for you. I think the fact I am nit picking about if this album is perfect or not speaks as loud as these riffs as to how great it is. Sure it might still need to grow on me , but half the time I am debating on if I am going to listen to an album again, and I have already given this one a half dozen spins , which is big in my book. It is going to be hard for me to imagine this not making my top ten doom albums this year. It drops June 5th.