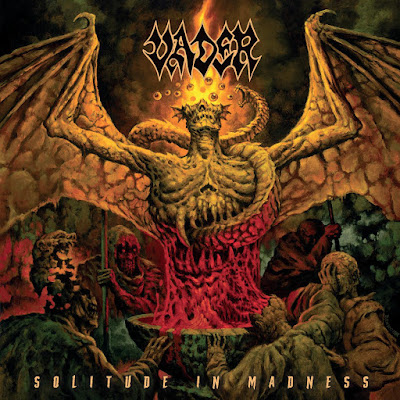 From the opener I am beginning to think Vader are becoming the AC/DC of death metal. I have seen people say things like another Vader album , under the pretense it is automatically going to be good. This is much like how Post-Bon Scott AC/DC all sounds the same. The vocals are almost more gruffly spoken than growled. Given it a more thrash like feel.There is more groove and purpose to "Into Oblivion" with it's more militant goose stepping style syncopation. "Despair" could be any one from Wargasm to Unleashed. The keep things at a racing up-tempo drive. The drumming is as insane as every. Some of the best double bass you are goin to hear. Is that all you need from music. The songs are all in the 3 minute range. Given how they are burning through them it is not surprising.

Without question this is tight as fuck and these guys are very fine tuned at what they do. In fact both of those sentiments are understating what a machine this is. This can play against them as like a machine there is not a ton of feeling in what they are doing and they might s well be punching a time clock. Four songs in I stepped away from the lap top to play video games and left the album playing. It not only blew by in a blur of chugs, but some where along the way iTunes shifted over to "Welcome to the Morbid Reich" and I almost did not notice. Not to say this album is as good as that one, but in the past 9 years not much has changed. "And Satan Wept" is a pretty dumb song title. Lyrically things have been the normal mish mash odes to destruction as your average metal album. I can appreciate this . A lot of the lyrics make apocalyptic references which I like as they are so timely, it's a shame most of their fans pump their fists to this , but if an apocalypse even casts a shadow near by they are hiding under the covers waiting for the government to tell them what to do.

There is a little more of a thrash groove to "Emptiness". The solo is very rock n roll. This is the best song on the album so far. Then the songs begin to all sound the same with the most variation cropping up on "Dancing in the Slaughterhouse". With songs like "Final Declaration" that are just boring. The last two songs are under two minutes and jack hammer through your ears with little regard for dynamics. I will round this one down to a 7.5. The fact they are great musicians elevates it above mediocrity, but I need more than that to listen to an album more than twice/