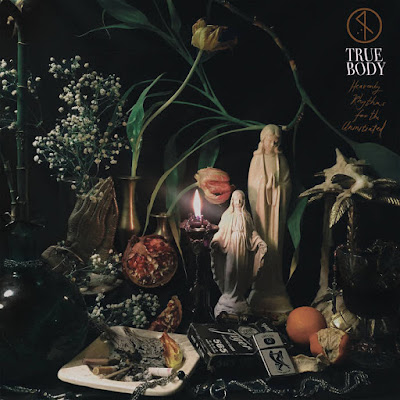 This updated take on the darker slant of 80s pop called new wave, is less polished by a record label than the bands who came after Interpol. The vocals are more crooned, but less hooky. The vocals do have more form and function on the more intense shadows cast by the second song. The singer reminds me of a more refined version of the guy from Bellicose Minds. The do get noisy and more post-punk in places. Even building into a rowdy snarl. They smooth things out on "Chain" though still are unable to tap into the kind of song writing that made this era great. In fact this song is less focused than the previous two. They have the sounds at this point but not the songs. What does work is when they back off and let the synths take over on "First Thing".It still does not hit the kinda catchy sweet spot that it could have. It is more focused than the previous song.

They inch closer to where I want them to go on "Glitter". The singer has a tendency to sound flat in place. When this song kicks in there is more of a fuzzed out punk thing going on so this band is torn in different directions. They have some cool sounds that could have been assembled more effectivly on "Sympathy". These guys have more legit punk backgrounds than early 00's bands attempting this could have claimed. If they are not going for the 80s pop thing then this more experimental direction they take 'Youth Hotel" is a good idea. It touches on a more Depeche Mode side that should be more throughly explored. This guy's voice has been making me think of the first Faith No More singer Chuck Mosely the bulk of the album and now is the first time I am going to say anything about it. I am not sure some one who is into post-punk is going to know that reference, so if not Youtube "the Crab Song".

There is a slightly more poppy tone to "Television" . While the vocals are not improving greatly, they are at least falling in more pleasing places. "Ariel" finds them pursuing this path further. I will round this down to an 8 due to the fact the vocals could have been better , but I do like how they take a classic sound and make it more intense.