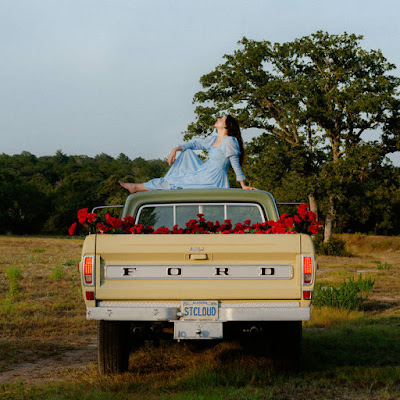 The mission statement of this site is to spread sonic darkness. This is the light of sonic dusk. I have been covering more with a country flair. Here it s a subtle mix of pop with alternative country and then filtered back through pop again. Mainly due to the masterfully written vocal melodies of Katie Crutchfield. There is a touch of Indigo Girls mixed into the harmonies . They are doing this is such a smart manner , it breaks boundaries and is just plainly good much twangy jangle and all. She shows her upper range on "Fire". The is more of a rock feel to the palm muted guitar. By rock we are talking War on Drugs. The melodies and groove work flawlessly. This is next level songwriting. "Lilacs" has a touch of both Bob Dylan and Dolly Parton to it. The hooks are not as tight on this one.

She wrote these songs after getting sober, so there is where the underlying darkness is . After all some kind of pain and suffering is needed in order to capture something real. This album is really well produced . All the tones immaculate and sit right where they should. She stays in a mid range, mostly alto, not digging down to deep, but not afraid to flip over into her head register. 'Hell" is the album's next perfect moment. The lyrics really knocking it home. After reviewing the Gray Matter album where the lyrics were a draw back, it's a relief to hear some that resonate with real life themes and soul baring honesty. I do not care if you lie about everything else as long as your music is the truth. "Witches" is good , but not as good as the previous. It's more casual conversation. There is more of a rambling motion to the momentum of " War" that recalls the more upbeat moments of Fleetwood Mac , but with more serious self appraisal in the lyrics.

The introspective continues with the strum of "Arkadelphia" . It has more of a folk story telling to it. She hints at what doesn't work in 12 step culture for her in the lyrics. "Ruby Falls" is like a lazy river. I appreciate the lyrics but as far as melodies go the bar has been raised higher earlier in the album. It ends with the title track. It is more of a folk song, though country does leave it's mark in it. It is not as hooky and the lyrics are weighed down by their own narrative. The instrumentation is minimal. Piano and barely heard guitar. It is one of the album's longer songs because it is one of the slowest songs on the album. I will round it up to a 9.5,. There are no bad songs on it some just gripped me more than others. Some were just more infectious.