the Appleseed Cast : " The Fleeting Light of Impermanence" 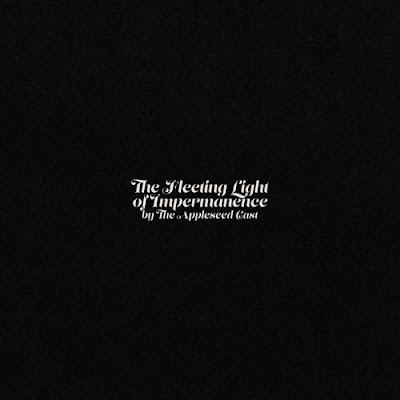 The opener has more of an odd math rock jangle than I remember the band having when I listened to them in the 90s. The mix is weird with the drums having a very raw sound like they were recorded in the practice space. On "Petition" you can hear where they influenced bands like Death Cab For Cutie.There is more of a flowing groove here. There are more electronic elements than I remember the band having this time around. "Time the Destroyer" is a great song that is darker . It blends atmosphere and melody while having a subtle drive. "Collision" falls in line with the sound they are known for , perhaps it rolls with more ambiance, but carries the same emotional current you would expect from them.

Some of the songs begin to share uniform patterns. It requires a second listen to tell them apart if you are not paying attention as the album loses it self in the flow. More more dominant synth line separates'the Journey " from the other songs. Though it sounds like it could be an extension of the previous song if they jammed it out. This album proves that these guys are certainly the most progressive band from this genre. The vocals are more sparse as the sonic sprawl takes over. The vocals are often mixed into the background or deep within the swathe of synths , but are laid bare in the middle of "Asking the FIre" . This is another of the album's more outstanding songs. It comes all the dynamics they have in play with emotional depth. That is what emo used to mean before it became about hair cuts.

Waiting two minutes for the song to happens on "Reaching the Forest" is a bit much. The actual song it self is kinda straight forward for these guys. The last song is more of what I want from them. The bass line drives a groove until it builds into a soaring climax. The vocals don't come in until half way into the song. I will round this up to a 9.5. The songs that did not grab me from the get go will grow on me. Their return did not disappoint me.