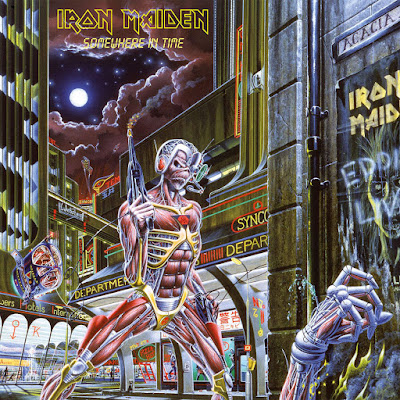 Normally when I go back and review older albums to see how they stand up they fall under the "Looking Back In Anger " column, but since I am readying myself for this weekend's Iron Maiden concert I decided to review a perhaps more underrated album each day until the show, so here begins our Maiden voyage. I starting this with their 1986 album  'Somewhere in Time"  This album was very decisive when ti came out and many though it was a sell out because it had synths on it. Up to this point the band was a relentless touring machine and pumping albums out since "Number of the Beast", so I can understand why they wanted to progress as on the album before this one they ventured into a more proggy side with the mammoth "Rime of the Ancient Mariner". The opening title track, has the driving gallop and Bruce singing his balls off so not sure what else you could need from these guys. There is a more user friendly hook to "Wasted Years" which I can understand the concern about, but it is one of the band's best songs from a song writing perspective, despite not being one of the heavier offerings.

There is a more rock n roll feel to "Sea of Madness" . Nico's drumming on this is outstanding.All the elements you can want from this band are in play. I think Bruce's voice might even sound better , though he is not going for some of the outrageous notes he hits on "Powerslave". It's a smoother performance from him. Things get really melodic and interesting on the solo section. The first song that threatens to get to happy for me is "Heaven Can Wait" it's mainly in the refrain of the chorus and the sing - along part. I am not a fan of sing along parts. Lyrically obtuse, I have always liked "the Loneliness of the Long Distance Runner" . There is a more melancholy touch to it. This also carries  over into "Stranger In a Strange Land". "Deja-vu" also carries a darker and this time more sinister tone, until you get to the chorus.

In the 80's and eight and a half minute song was still pretty long. "Alexander the Great" is this album's long winding epic. It is yet another song that has a darker moodier current to it. It also has some great guitar playing.  This album was worn out by me when it came out, the songs still stand up and it is as much fun to listen to now as it was then so I will give it a 10.